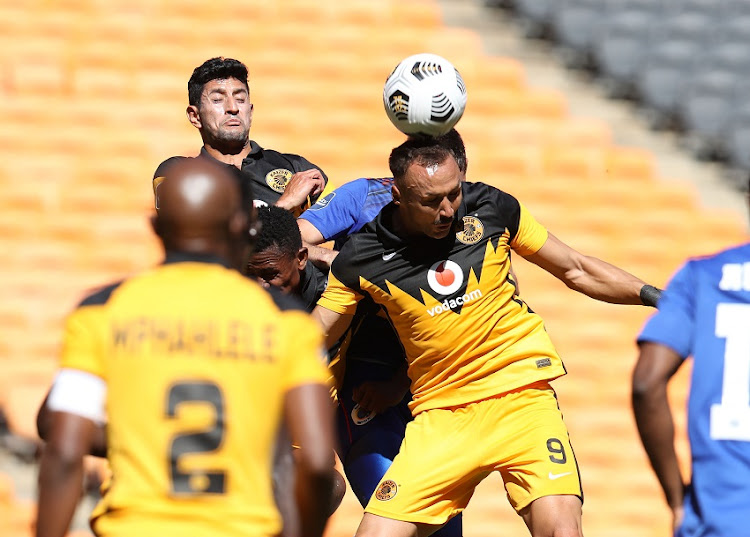 Samir Nurkovic of Kaizer Chiefs competes for the ball with Bradley Grobler of Supersport United during the DStv Premiership match between Chiefs and SuperSport at FNB Stadium on February 20 2021 in Johannesburg.
Image: Muzi Ntombela/BackpagePix/Gallo Images

Kaizer Chiefs fans have expressed lukewarm reactions to the team's 1-1 draw against SuperSport United during a DStv Premiership match at FNB stadium on Saturday.

Some Amakhosi fans said they were disappointed by the team's performance and that they had hoped for a win, especially after Chiefs' defeat by AmaZulu on Wednesday. But others were less critical, saying Gavin Hunt's men played “their hearts out”.

The match started off on a good footing when Reeve Frosler scored the first goal for Amakhosi 29 minutes into the match, but their dominance didn't last long as Bradley Grobler of SuperSport United converted a penalty 67 minutes into the game.

Twitter user Mondli Mbatha wrote: “Honestly speaking I'm not disappointed we drew the game because we played our hearts out.”

Another fan, Samora Ganeb, expected more from Amakhosi. He tweeted: “Watching Kaizer Chiefs has become such a traumatic event.”

Couple of good chances there for Ngcobo and Blom. Hard luck boys. Next time do us proud.

No complaints. We fought hard till the last minute..A draw is better than nothing. On to the next one....✌✌✌

Watching #KaizerChiefs has become such a traumatic event.

Decent performance by the team today. Unlucky not to get the win. Better luck next time. ❤✌

Why I am still a #KaizerChiefs fan mara, ke gore why mara? The nerve to watch it, yhooo I am worse😭. pic.twitter.com/6U0Z6MGvB4

It's like watching a completely different team 😳😳
Kanti what did Gavin say to these guys during half time??#KaizerChiefs #Amakhosi4Life ✌🏿✌🏿#DSTVPREMIERSHIP pic.twitter.com/AdvHrLXqeD

Itumeleng Khune did a wonderful job today, at the end it's a game#Amakhosi4Life #KaizerChiefs

Kaizer Chiefs would have felt they deserved more than a point, but Gavin Hunt's work in progress Amakhosi will need to strategise to consolidate a ...
Sport
1 year ago

Kaizer Chiefs waste chances having to settle for draw against SuperSport

Kaizer Chiefs would have felt they deserved more than a point, but Gavin Hunt's work in progress Amakhosi will need to strategise to consolidate a ...
Sport
1 year ago

Gavin Hunt’s search for a winning formula at Kaizer Chiefs has seemingly hit a brick wall again as the team prepare for a second tough DStv ...
Sport
1 year ago