Justin Thomas notches first win of season at The Players 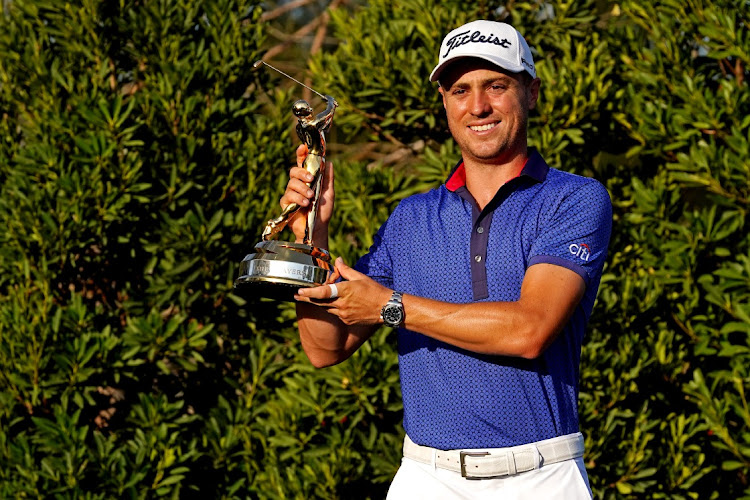 Justin Thomas used a mid-round charge to push into the lead on Sunday and earn a one-shot victory in The Players Championship at Ponte Vedra Beach, Florida.

Thomas' first victory of the season and 14th in his career on the PGA Tour came after he delivered a 4-under-par 68 in the final round at the TPC Sawgrass Stadium Course.

He finished at 14-under 274 for the tournament following his 3-foot par putt at the final hole.

Third-round leader Lee Westwood of England shot 72 and finished alone in second place at 13 under, while Brian Harman (69 on Sunday) and Bryson DeChambeau (71) tied for third place at 12 under.

Talor Gooch (67) and England's Paul Casey (70) finished tied for fifth place at 11 under, while Canada's Corey Conners was alone in seventh place at 10 under.

Thomas was three shots off Westwood's lead at the start of play on Sunday and was plodding along at 1-over par through eight holes following a three-putt bogey at the par-3 eighth.

It managed to light a fire, though, with Thomas playing the next four holes at 5 under, including an eagle 3 at No. 11.

The 19-foot putt for eagle gave him the lead at 13 under, which he pushed to a two-shot advantage at 14 under when he recorded a birdie at No. 12.

Asked if he was certain a victory was ahead, Thomas said his mindset was far from a trophy presentation.

"You can hit a lot of great shots on 13 through 18 and not make one birdie or even play them over par.

"No. 17 is such a crapshoot this week with how firm that green was, and then you have adrenaline going. And 18 is 18, so there's a lot going on."

Thomas' bogey at No 14 helped Westwood pull even briefly but his birdie at the par-5 16th hole gave him sole possession of the lead again.

He had a par at the famed island green on No 17 before flirting with disaster at 18.

Thomas's tee shot on the 72nd hole hugged the water on the left side of the fairway but stayed dry.

He put his approach shot on the fringe and used two putts from there to close out the victory.

"I was in such a great frame of mind and focused all day," Thomas said.

"Yeah, it was nice to get in that little head space."

DeChambeau was unable to turn a final-round pairing with Westwood into a victory like he did last week at the Arnold Palmer Invitational.

He was at 1-over par for the day when he eagled the 16th hole, putting him two shots off the lead. He had a par on each of the last two holes, just missing a birdie putt at 18.

Westwood entered the final round with a two-shot lead and stayed in contention throughout the final round despite playing the front nine in 1-over par after three bogeys.

He had a birdie at 14, but was unable to make up any ground on 16 as DeChambeau was recording his eagle.

A long birdie putt to tie for the lead at 17 was well left and he missed his 9-foot par putt to all but seal his fate. His birdie at 18 gave him sole possession of second place.

World number one Dustin Johnson confirmed on Saturday he did not put his name forward for a spot on the US team for this summer's Tokyo Olympics and ...
Sport
2 months ago

A day after he turned 30, Daniel van Tonder teed off in yesterday's third round of the Sunshine Tour's Players Championship at Dainfern with the goal ...
Sport
2 months ago

Tiger Woods offered a heartfelt thanks to his fellow golfers for their tribute on Sunday, where many donned the 15-time major champion's signature ...
Sport
2 months ago

Rory McIlroy and Justin Thomas are among the golfers set to don Tiger Woods' signature Sunday red and black during the final round of the World Golf ...
Sport
2 months ago

Justin Thomas learned of Tiger Woods' single-car accident Tuesday while preparing for the WGC-Workday Championship at The Concession in Bradenton, ...
Sport
2 months ago
Next Article