Tatjana Schoenmaker unstoppable in Gqeberha as she smashes her SA record 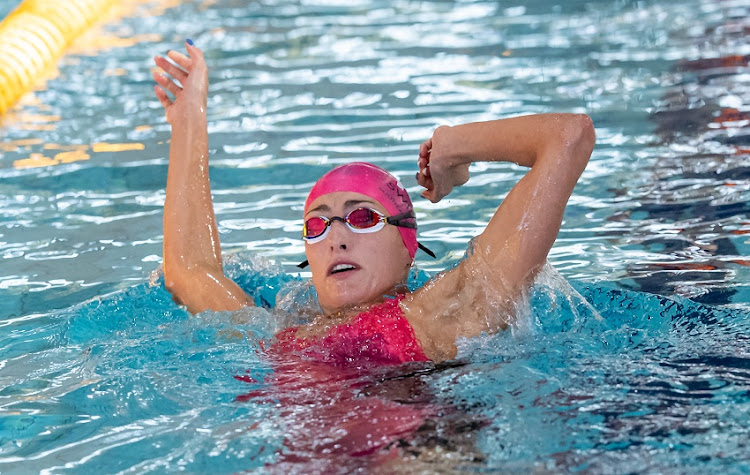 Tatjana Schoenmaker was unstoppable in the Newton Park Swimming Pool in Gqeberha on Friday night as she bettered the SA and African record to claim the gold in her speciality 200m breaststroke event at the SA Invitational Aquatics Championships on Friday evening.

Schoenmaker‚ who stormed to victory in the heats‚ bettered her time to dip under the Olympic qualification time for a second time‚ stopping the clock on 2:20.17‚ after a 2:22.26 earlier in the day.

The Gauteng swimmer was overcome with emotion after her record-breaking feat that saw her take more than a second off her own record time set in 2019.

“This morning I did go out quite fast and I couldn’t hold it‚ I was really trying but I was dead. So‚ I was just hoping to be kind of on the same time — just a bit more comfortable‚ not so rushed and nervous about it.

Olympic hopeful Tatjana Schoenmaker signalled her intentions on day one of the SA Aquatics Championships as she set a new national record in the 50m ...
Sport
1 year ago

“I tried to control that race as much as I can and focus on my stroke counts. So‚ I cannot complain. Obviously‚ the 50 did help a little coming back‚” she said.

Schoenmaker said beating her own mark was something that she did not expect.

“I was quite sore but I didn’t expect it to be a 35-second split on the last 50‚ but it is definitely better than this [Friday] morning’s 38.

“I was hoping to be in that range but when I touched the board‚ people were cheering and I thought I might hit a 2:21‚ but a 2:20 low is crazy‚” she said.

“I wasn’t really trying to do that. I was just trying to swim my best time and give my best in the pool‚” he said about beating Le Clos.

“I went pretty hard from the take-off‚ so I just tried to keep it smooth and push as hard as I could on the way back‚” he said.

Asked about his time‚ Sates said it was not something he focused on too much‚ as he just wanted to execute a race-winning performance.

Eastern Cape swimmer Alaric Basson won the gold in the men’s 200m breaststroke in a time of 2:13.44‚ adding to his 50m title he won on Wednesday.

Gauteng swimmer Tatjana Schoenmaker showed her class in the Newton Park Swimming Pool in Gqebera as she set two national records and claimed gold on ...
Sport
1 year ago