Tatjana Schoenmaker chalks up her third national record in Gqeberha 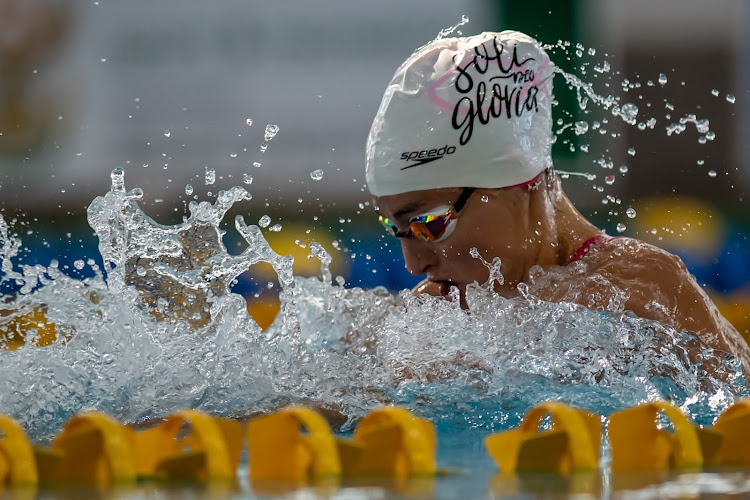 Tatjana Schoenmaker moved into second position in the 100m women’s breaststroke world rankings as she chalked up her third national record on day five of the SA Invitational Aquatics Championships in Gqeberha on Sunday evening.

Schoenmaker’s time of 1min 05.74secs, which was also an African record, ensured the Gauteng swimmer ended her main events with a clean sweep of three gold medals along with three SA and African records. The Commonwealth Games double gold medallist is now the second fastest women on the planet, behind the 2016 Olympics 100 breaststroke champion Lilly King from the US.

Schoenmaker said she was oblivious to her own time as she was more concerned about fellow Gauteng swimmer Lara van Niekerk, who narrowly missed the qualification mark.

“When I touched, I tried to look where she is. When I looked at the board and realised she missed it, without even realising, I had swum my own PB.

“I cannot complain [about the 100m final]. Compared to this morning, I could definitely feel all those 200s kicking in, so I felt much better but I think it was also the excitement of Lara maybe joining me in the 100,” she said.

SA Olympian Chad Le Clos admitted he would need to be at the very peak of his powers if he wants to bring home a medal this year after claiming the 100m national butterfly title on Sunday.

Le Clos held off determined KwaZulu-Natal swimmer Matt Sates as he finished the sprint in a time of 52.13 secs, only two hundredths of a second ahead of Sates, who finished with a 52.15.

While satisfied with his performance, the Rio 2016 silver medallist was full of praise for the fight shown by the promising young swimmer.

“I’m happy [about the win] but sad for Matt because he didn’t get the time.

“I expected it to be really tough out there because he is in great shape.

“I wanted to control the race better. I wanted to take it to him in the first 50m but I think he touched ahead of me and I knew I had some work to do.

“It is a morale boosting win for me because of where we are in the training, to pull out a win like that, the old Chad, coming from behind to win,” he said.

Gqeberha’s Alaric Basson could not improve on his morning PB when he claimed the gold in the men’s 100m breaststroke final with a time of 1:01.29 while KwaZulu-Natal’s Erin Gallagher took gold in the women’s race.

Tatjana Schoenmaker is on top of the world

Tatjana Schoenmaker will be the main attraction when she tackles the women's 100m breaststroke event today after swimming a world-leading time in the ...
Sport
1 year ago

Tatjana Schoenmaker unstoppable in Gqeberha as she smashes her SA record

Tatjana Schoenmaker was unstoppable in the Newton Park Swimming Pool in Gqeberha on Friday night as she bettered the SA and African record to claim ...
Sport
1 year ago