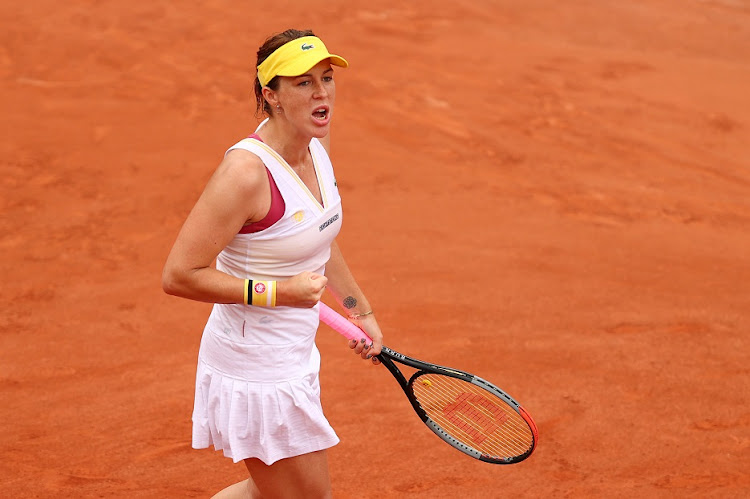 Anastasia Pavlyuchenkova of Russia celebrates winning a point during her match against Aryna Sabalenka of Belarus at the French Open.
Image: Julian Finney/Getty Images

Third seed Aryna Sabalenka crashed out of the French Open with an error-filled third-round defeat to experienced Russian Anastasia Pavlyuchenkova on Friday, leaving the women’s draw without its top three seeds at the clay court Grand Slam.

After the exits of Ash Barty and Naomi Osaka, the Belarusian was the highest seed remaining this week in Paris but she failed to keep a leash on her unforced errors to lose 6-4 2-6 6-0 to the 29-year-old Russian.

The start of the match was a complete contrast as Sabalenka peppered the red clay on the Simonne Mathieu court with an abundance of winners and Pavlyuchenkova could not handle the Belarusian’s brutal power.

Sabalenka, who defeated the Russian in the semifinal in Madrid on her way to the WTA 1000 title on clay, jumped to a 3-0 lead but her unforced errors abruptly mounted and Pavlyuchenkova stunningly won six of the next seven games to bag the set.

The 23-year-old found her range in the second set and hammered another flurry of winners to take four games in a row to level the match.

Pavlyuchenkova then went off court to receive medical attention for a leg problem and returned with her left thigh heavily strapped.

World number one Ash Barty retired from her second round match at the French Open on Thursday with an injury, leaving the women's draw at the ...
Sport
2 weeks ago

She also seemed to have added another gear to her game while Sabalenka cut a frustrated figure on court, throwing her racket away and hitting a ball in the air in anger, which earned her a code violation warning.

The world number four hit 17 unforced errors in the deciding set, the last of them on match point, against three from Pavlyuchenkova, who hit 22 winners in the match — just about half the number of winners hit by her opponent.

The Russian will next meet another Belarusian in two-time Grand Slam winner Victoria Azarenka, who swept past American Madison Keys 6-2 6-2.

It was the first time that Pavlyuchenkova has advanced to the second week at Roland Garros since her quarterfinal run as a 19-year-old in 2011.

“I’m trying to embrace this. I’m enjoying much more now every point, the tough matches than I used to before,” the Russian said. “I guess that’s also the reason why I’m still here in the second week.

“Also I feel like I’m fitter. Because I’m enjoying playing tennis, I work harder. You work hard, you enjoy the hard work. I think that’s the best combination.”

Venus Williams and Coco Gauff, 23 years apart in age, fell at the first hurdle of the French Open women's doubles on Wednesday when they lost 7-6(5) ...
Sport
2 weeks ago

Leading figures in tennis and sport have rallied to support Naomi Osaka after the women's world number two withdrew from the French Open in a row ...
Sport
2 weeks ago