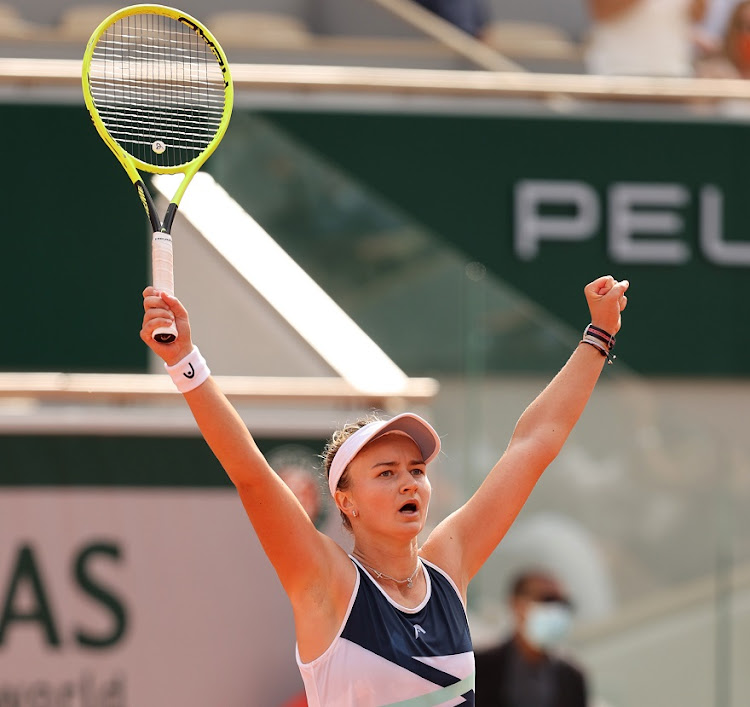 Czech Barbora Krejcikova said she was going to enjoy a rare glass of champagne on Sunday after completing a singles-doubles title sweep at the French Open by taking the women's doubles trophy with compatriot Katerina Siniakova.

Krejcikova became the first player to win both the women's singles and doubles title in Paris since Frenchwoman Mary Pierce completed the feat in 2000 after the Czech duo beat Iga Swiatek and Bethanie Mattek-Sands 6-4 6-2.

The 25-year-old Krejcikova, who will climb to 15th in singles following her maiden Grand Slam singles title on Saturday, will return as the world number one doubles player when the rankings are updated on Monday.

"I think we are going to have a dinner together this evening," she told reporters.

"We will have a little bit glass of champagne. I already said I don't really drink but I think it's a time to actually celebrate it. I think we are going to really enjoy.

"The rest, I just want to go back home. I just really have to relax. I have to spend some time with my family. After that just start to work again."

Less than 24 hours after picking up her first singles major title, Krejcikova returned to Court Philippe Chatrier but it was not easy.

"Like yesterday so many emotions and everything. I didn't really sleep well.

"I woke up in the morning and I felt really tired. I can actually say that out loud right now, I'm having some pains in my leg," she said.

"I'm really happy that it went this way. I actually went really relaxed today when I went on court.

"I was just trying to really support my partner and also just try to cheer her up a little bit."

Swiatek, the 2020 singles champion, and Mattek-Sands were playing only their third tournament together and found the going tough against Siniakova's nimble movement and skilful netplay and Krejcikova's strong performance from the baseline.

The second-seeded Czech pair, who also won the Roland Garros title in 2018, quickly jumped to a 5-1 lead and though Swiatek and Mattek-Sands fought back to 5-4 they could not stop Krejcikova from serving out for the set.

On a windy day under the Parisian sun, Siniakova had continued trouble with her serve and the Czech duo had a total of eight double faults in the match.

But the pair, who also won the 2018 Wimbledon doubles title, overcame their serving trouble with their experience and excellent coordination.

The number two seeds lost serve once in the second set but broke their opponents three times and sealed the win when Siniakova hit a backhand winner on their second matchpoint.

Paris — Novak Djokovic came from a set down in a spellbinding French Open semi-final to inflict only a third ever defeat on the Parisian clay for ...
Sport
5 months ago

World No 1 Novak Djokovic said his win over Rafael Nadal in Friday's epic French Open semifinal was one of the top three matches he had played and he ...
Sport
5 months ago

After one of the most wildly unpredictable women’s singles draws in French Open history, Russia’s Anastasia Pavlyuchenkova stands on the threshold of ...
Sport
5 months ago

Paris— Greek fifth seed Stefanos Tsitsipas staved off a spectacular fightback from US Open runner-up Alexander Zverev for a 6-3 6-3 4-6 4-6 6-3 ...
Sport
5 months ago