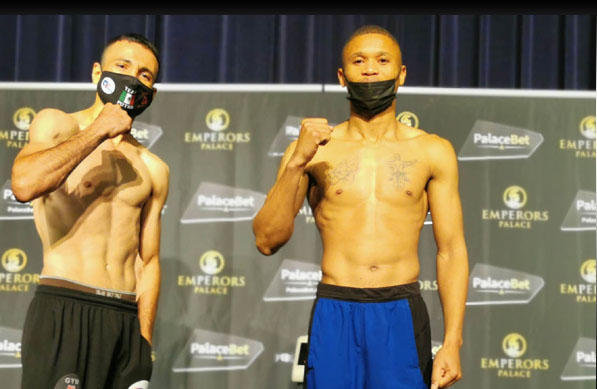 An exhausted and bleeding Ludumo Lamati survived a Mexican assault in the final two rounds to lift the vacant IBO junior-featherweight crown at Emperors Palace on Saturday night.

Lamati and Jose Martin Estrada Garcia delivered a war for 12 rounds, and only they will know how they managed to stay on their feet for the duration of this energy-draining contest.

It was exhausting just to watch. Lamati moved well early on and landed the more telling blows, but as the fight advanced he allowed himself to be dragged into trench warfare and he started paying the price.

By the 11th the South African, cut above his left eye, looked out on his feet, and from that point on he was in pure survival mode.

He said afterwards he had been caught with the head on his left eye and was unable to see at that point.

Lamati’s record improved to 18 wins and a draw, while Estrada dropped to 12 wins, two losses and a draw.

Mbenge nailed Makhense with a right and a left hook that left him on unsteady legs and then he pounced to force the referee to halt proceedings.

The victorious Mbenge immediately ran to the ropes and then shouted at promoter Rodney Berman: “I’m back!”

Berman had dropped Mbenge after he lost his IBO welterweight title in Germany in July 2019, and had focused instead on other fighters in his Golden Gloves stable, like Makhense.

But Mbenge, 29, showed he was far from finished with an inspired performance that underlined his status as the best welterweight in the country.

Brandon Thysse stopped Tomi Silvennoinen of Finland in the final 10th round of an entertaining international contest.

The South African hit his opponent with everything he had, but it was his body attack that finally convinced his foe to go down.

Silvennoinen beat the count the time, but after absorbing a few more blows to his midriff, he sank to his knees a second time and stayed down to notch up his first stoppage defeat.

Junior-middleweight Roarke Knapp was too strong for unbeaten Congolese Benoit Makalinga Vela, hurting him in the third round which convinced him to exit the bout on his stool before the fourth.

Veteran Johnny Muller beat Akani Phuzi by split decision over 10 rounds in their rematch, grinding out the victory on the inside, though it allowed for much holding.

Jabulani Makhense looked broken as he tried to complete his final round of a muscle-burning workout, which included running on all fours.
Sport
3 months ago

Toppies and over-aged pugilists can now take up the sport competitively after receiving the blessing of the South African National Boxing ...
Sport
3 months ago

The world has become an oyster for Azinga Fuzile.
Sport
3 months ago