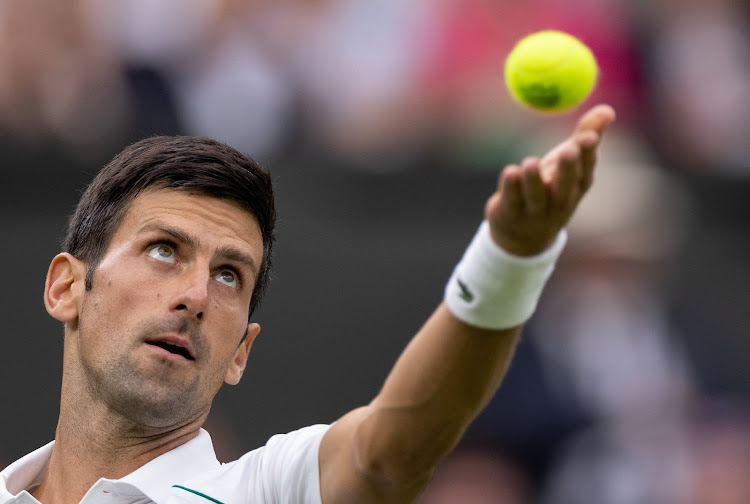 Novak Djokovic twice found himself on his backside in the first set and with the roof closed because of the rain that delayed play on the outside courts, the stage looked perfect for a Wimbledon shock of monumental proportions.
Image: Wimbledon/Twitter

Defending champion Novak Djokovic overcame an early fright to fend off British teenager Jack Draper 4-6 6-1 6-2 6-2 and launch his quest for a sixth title as Wimbledon returned after a two-year absence on Monday.

The first match on Centre Court since Djokovic's nailbiting victory over Roger Federer in the 2019 final -- 716 days ago -- was a classic David versus Goliath clash.

And while there was to be no dream Grand Slam debut for 19-year-old Draper, the match proved the perfect way to bring Centre Court back to life after it's enforced silence.

Djokovic has never lost a Grand Slam match to a player ranked as low as world number 253 Draper, but looked a little stunned as he struggled to find his footing on the greasy turf and contain the fearless hitting of the Briton.

Grand Slam main draw debutant Draper broke serve in the third game and made a mockery of his inexperience to win the opening set to huge roars from the crowd.

Twice Djokovic found himself on his backside in the first set and with the roof closed because of the rain that delayed play on the outside courts, the stage looked perfect for a Wimbledon shock of monumental proportions.

But Djokovic is not a 19-times Grand Slam champion for nothing and the Serb quickly snuffed out the danger, levelling the match by dominating a 26-minute second set.

When Draper completely missed an overhead to drop serve in the second set, Djokovic roared in relief.

From that point on it was straightforward enough for Djokovic who looked immaculate as he completed his victory.

"It feels great seeing everyone and being back on the most sacred tennis court in the world," Djokovic, who is bidding to win a record-equalling 20th Grand Slam title, said on court.

"It was very sad last year that Wimbledon was cancelled but really glad the sport is back."

Djokovic also had kind words to say about Draper who had vowed to cause his illustrious opponent problems and remained true to his word in one scintillating set.

“He definitely deserves a round of applause,” Djokovic said.

“He was walking on to Centre Court for the first time and carried himself very well and backed himself.”

Djokovic, unbeaten at Wimbledon since the 2017 quarter-finals, next faces South African Kevin Anderson in a repeat of the 2018 final.

Serena Williams will not be travelling to Tokyo for the Olympic Games, the 23-times Grand Slam singles tennis champion said on Sunday without giving ...
Sport
10 months ago

Opportunity knocks for Serena Williams on the grass courts of Wimbledon next week when she faces a diminished field on her best surface at the famous ...
Sport
11 months ago