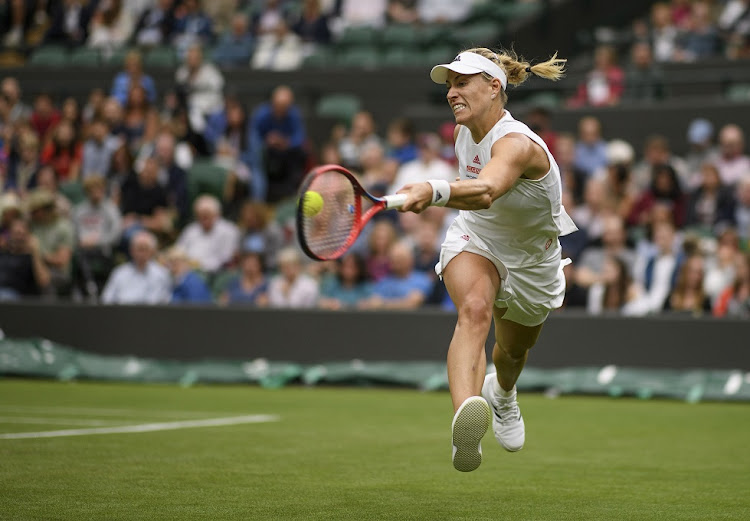 Angelique Kerber of Germany plays a forehand in her women's singles first round match against Nina Stojanovic of Serbia on day two of Wimbledon 2021.
Image: AELTC/Edward Whitaker - Pool/Getty Images

Former world number one Angelique Kerber made a wobbly start against Wimbledon debutant Nina Stojanovic on Tuesday before finding her groove on grass to secure a 6-4 6-3 victory and reach the second round.

Kerber, one of five former champions in the draw, came into Wimbledon full of confidence after her first title triumph in three years at the inaugural Bad Homburg grass court event last week.

The German left-hander made a slew of errors at the start of her first career meeting with Stojanovic, trailing 3-0 before switching gears to surge ahead of the 24-year-old and bag the opening set under the roof on Court One.

“I didn’t know what to expect ... she started really well, especially the first few games,” Kerber, who converted four out of 12 break point opportunities, said.

“She was playing really hard and fast, especially the first and second serves. I was trying to stay in the match, focusing on my chances. And also the last few games, especially last few points, I was a bit nervous.”

Serbian Stojanovic, who had troubled Kerber with her huge serve and variety of strokes, struggled to find her range and was left with a mountain to climb as the 2018 winner broke early in the second set to race 3-1 ahead.

Serving with authority at key moments, Kerber fended off a late comeback attempt by her unseeded rival to complete the win on her fourth match point when Stojanovic sent a return long.

Stojanovic hit 20 winners to Kerber’s 11, but made 32 unforced errors.

“She plays well, so she was going for it. I think it was a solid first round and first match. It’s great to being through,” Kerber said.  “I’m feeling really good. Especially, of course, with the win under my belt last week coming here to Wimbledon, that gives me a lot of confidence. And also playing on grass again, which I love to play. It fits my game.”

Up next for 2016 runner-up Kerber is unseeded Spaniard Sara Sorribes Tormo or Croatian qualifier Ana Konjuh.

Defending champion Novak Djokovic overcame an early fright to fend off British teenager Jack Draper 4-6 6-1 6-2 6-2 and launch his quest for a sixth ...
Sport
10 months ago

Second seed Aryna Sabalenka struck a barrage of winners to blitz past Romanian qualifier Monica Niculescu 6-1 6-4 on Monday and reach the second ...
Sport
10 months ago

World number three Simona Halep has become the latest big-name tennis player to withdraw from the Tokyo Olympic Games after the Romanian said she ...
Sport
10 months ago