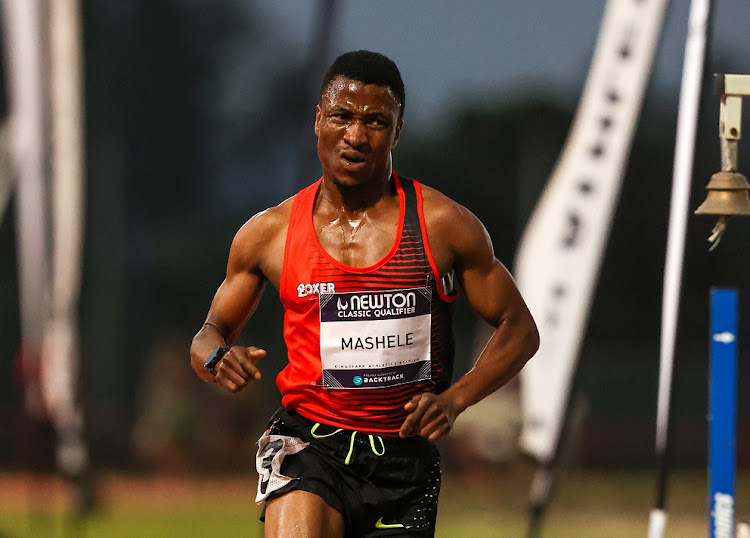 Precious Mashele in the men's 5000m during the Newton Classic Qualifier at Kings Park Athletic Stadium on May 28 2021.
Image: Roger Sedres/Gallo Images

Precious Mashele qualified for next month’s Tokyo Olympics in dramatic fashion in the men’s 5,000m in Durban on Tuesday night, clocking 13 min 11.65 sec to get inside the automatic qualifying mark by less than two seconds.

Even the 13:13.50 criterion was below his personal best going into the meet, which was arranged with the purpose of getting him to Japan.

But the attempt nearly went pear-shaped after the Kings Park stadium lights failed before the race. While the deadline to qualify was midnight, the 9pm lockdown curfew threatened to make matters tight.

Organisers responded by placing cars strategically around the ground to light up the track, but the stadium lights flickered to life in time for Mashele to dance his way into the Tokyo team.

Jo-Ane van Dyk, competing in a wet Lucerne, went into the women’s javelin needing nine points to climb the two places up the world rankings to the Tokyo take-off mat.

Her best effort of 57.81m earned her third place behind Germany’s Christin Hussong (64.02) and Tatsiana Khaladovich of Belarus (60.31).

She was set for a nervous wait for the midnight deadlines around the world to finish before learning her fate.