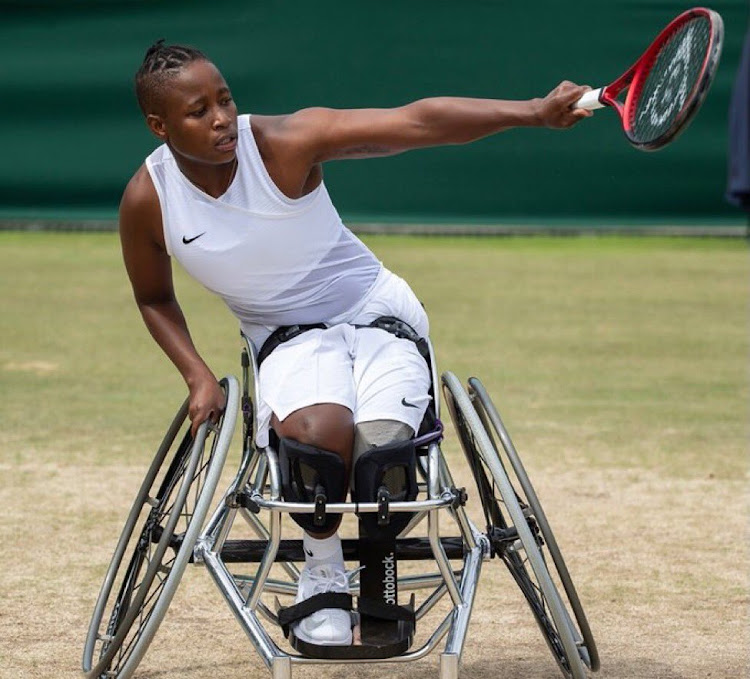 Kgothatso “KG” Montjane has set her sights on a podium finish at the Paralympic Games in Japan next month, and the South African wheelchair tennis ace insisted she will celebrate whether she brings home gold‚ silver or bronze.

The 35-year-old has been riding the crest of the wave after she became the first black woman from SA to reach a Grand Slam singles final following her exploits in the Wimbledon wheelchair championship decider at the weekend.

While she lost the match 6-2‚ 6-2 to world number one Diede de Groot‚ she was content with her performance against the Dutch player as her historic march to the final has also helped tick an important personal box that is part of her plan for the Paralympics.

The global showpiece will be held between August 24 and September 5, and on Monday Montjane said her long-term plan is starting to come together.

“[Reaching the Wimbledon final] was obviously a great milestone and I have just been struggling through the hurdles‚ trying to do better as a player‚ to grow as a player and I am very happy with the performance.

“To have made history again is all about giving hope to my fellow Africans‚ my fellow South Africans and the country‚ to just never give up.

“We know how tennis is viewed in our country. Being out here was [also] about being an ambassador and representing the continent really‚ really well and hoping I can inspire the younger generation to never give up in taking the sport [further].

“I am grateful for what I have achieved and big up to my team for never giving up‚ for soldiering on with me during all the struggles and making sure I get to be out here and competing.

“The struggle continues and I still hope for the best."”

Montjane said the plan has always been about the Paralympics and she is happy  it is slowly coming together with the global showpiece just weeks away.

“This week for me [at Wimbledon] I was taking every match as if I was playing at the Paralympics.

“From the first match I was telling myself this might be a quarterfinal for me in the Paralympics. Getting into the last four‚ that is when I saw the podium and then the opportunity to reach the final sums it up.

“That could have been an Olympic final so I am pretty positive that finishing on the podium is possible and that has always been my goal.

“I do not care which medal I get in the Paralympics. As long as I finish on the podium I will be happy.

“This performance is such a confidence-booster for me. Going into the Paralymics I am aiming to finish on the podium no matter what colour the medal is.”

Novak Djokovic's ability to play his best tennis under pressure can help him win at least five more Grand Slam titles, John McEnroe said after the ...
Sport
3 months ago

World number one Ash Barty became the first Australian woman to win the Wimbledon singles title for 41 years on Saturday when she defeated Czech ...
Sport
3 months ago

Kgothatso Montjane may not have won the Wimbledon wheelchair singles final on Sunday night but the Limpopo-born player's star shone bright as she ...
Sport
3 months ago

Kgothatso ‘KG’ Montjane has set her sights on a podium finish at the Paralympic Games in Japan next month, and the South African wheelchair tennis ...
Sport
3 months ago