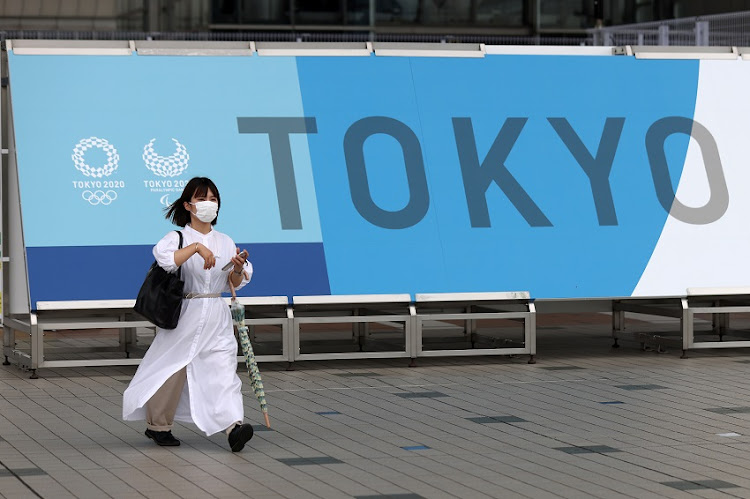 A woman leaves the building during the official opening of the Tokyo 2020 main press centre ahead of the Tokyo Olympic Games on July 1.
Image: Rob Carr/Getty Images

Major Olympic sponsors will not attend this week's opening ceremony, domestic media said on Tuesday, dealing another blow to a slimmed-down Games as more athletes tested positive for the coronavirus.

The Games, postponed last year because of the pandemic, open on Friday but will be held without spectators after Japan this month decided that participants would compete in empty venues to minimise the risk of further infections as cases in Tokyo rise.

Public concern has grown that hosting an event with tens of thousands of overseas athletes, officials and journalists could accelerate infection rates in Japan's capital and introduce Covid-19 variants that are more infectious or deadlier.

Organisers, for whom International Olympic Committee (IOC) President Thomas Bach said cancelling the event had never been an option, have promised to keep the Games “safe and secure”.

But experts see gaps in an Olympic “bubble” that mandates frequent testing and has been designed to limit participants' movements.

There have been 67 cases of Covid-19 infections in Japan among those accredited for the Games since July 1, when many athletes and officials started arriving, organisers said on Tuesday. That does not include those at local training camps.

Two members of Mexico's Olympic baseball team tested positive for Covid-19 at the team hotel before their departure for Tokyo, the country's baseball federation said on Tuesday.

The athletes, Hector Velazquez and Sammy Solis, who tested positive on July 18, have been isolated, as have all team members pending results of more tests, it said.

The first major test of how an Olympics can be held in the midst of a pandemic may well come on Thursday in the men's soccer tournament when Japan face a South Africa side that could struggle to field 11 players due to the coronavirus.

Bach said on Tuesday organisers could never have imagined the “unprecedented challenges” of bringing the global event to Tokyo, and praised the “heroic efforts” of medical personnel and volunteers around the world amid the pandemic.

“The IOC never abandons the athletes. Therefore, we took an unprecedented decision to postpone the Games. Today I can admit we did not know how complex this would be,” he said.

Comments by Bach and other IOC officials have in the run-up to the Games sparked outrage on social media in Japan for appearing to dismiss concerns about the pandemic.

Japan's Emperor Naruhito will meet Bach on Thursday, Kyodo news agency reported. Japanese media said Naruhito, who has spoken of his memories of the 1964 Olympics that Tokyo hosted, will attend the opening ceremony on Friday.

“It's obvious that the bubble system is kind of broken,” said Kenji Shibuya, the former director of the Institute for Population Health at King's College London.

“My biggest concern is, of course, there will be a cluster of infections in the (athletes') village or some of the accommodation and interaction with local people,” Shibuya added.

A rocky vaccination rollout has added to concerns. About one-third of Japan's population has had at least one vaccination shot and about 22% are fully vaccinated, one of the lowest rates among wealthy countries.

Days before the opening ceremony in Tokyo, 68% of respondents in an Asahi newspaper poll expressed doubt about the ability of Olympic organisers to control coronavirus infections, with 55% saying they were opposed to the Games going ahead.

A Ugandan weightlifter, Julius Ssekitoleko, who went missing from a Japan-based training camp last week leaving a note saying he wanted to stay in the country Japan, was found on Tuesday, public broadcaster NHK said. There has been no suggestion that he has contracted Covid-19.

Bach also said that World Health Organisation director-general Tedros Adhanom Ghebreyesus would be in Tokyo on Wednesday to “share his thoughts with us in a keynote speech”.