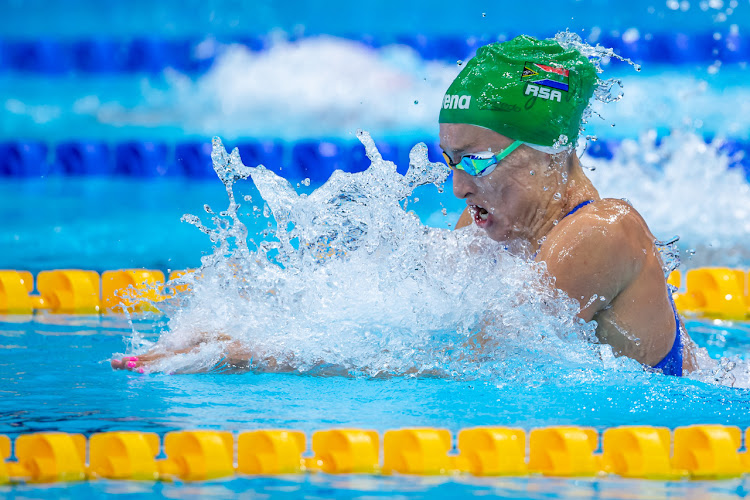 Tatjana Schoenmaker in action during the 100m breaststroke heats at the Tokyo Olympics.
Image: Anton Geyser/SASPA/SASI

Tatjana Schoenmaker downed loud-mouthed Olympic champion Lilly King of the US in the 100m breaststroke heats on Monday morning to claim pole position for Tuesday’s final.

Schoenmaker is well poised to win SA’s first medal at the Tokyo Olympics‚ and the country’s first swimming gong by a woman in 21 years.

More importantly‚ however‚ she is bidding to become only the second woman in history to win the breaststroke double at a Games after compatriot Penny Heyns at Atlanta 1996.

Schoenmaker and King‚ who had boasted last month that the American women swimmers could win all the golds on offer in the pool‚ had competed in different heats on Sunday night‚ when the SA star clocked her 1min 04.82sec Olympic record.

On Monday morning they squared up against each other in adjacent lanes in the second semifinal‚ and Schoenmaker gained the psychological boost as she touched first in 1:05.07.

She was slightly slower than the previous evening‚ but she was still the fastest in the field. King was second in the heat and overall in 1:05.40‚ the only one of the top five to improve on her heat time.

Tatjana Schoenmaker set an Olympic record in the 100m breaststroke heats in Tokyo on Sunday, taking pole position ahead of Monday’s semifinals.
Sport
4 months ago

“This race I was trying to see — especially because it being in the morning I was quite tired — if I can stay with her. That was the plan.

“I wanted to make a lane in the final so we can race now and be ready for the finals.”

Schoenmaker said her effort in the evening heats felt surreal.

“It was literally like a dream. I didn’t even notice my cap was falling off. Today I felt my cap and I was, ‘OK, it’s busy falling off now’‚” she said with a laugh.

Unheralded SA surfer Bianca Buitendag moved to within one round of a medal shot with a giant-slaying performance early Monday morning.

The University of Pretoria’s swimming team as well as the elite athletes who train at its spotless facility are fortunate to have Abel Mokoena, who ...
News
5 months ago

Buitendag‚ at 17 the lowest-ranked seed still in the game‚ will take on Yolanda Hopkins of Portugal who saw off world No 2 Johanne Defay of France.

Their quarterfinal clash is scheduled for 2.24am on Tuesday (SA time).

Alan Hatherly recovered from a poor start to finish eighth in the men’s mountain bike race on a tricky course‚ crossing the line less than a minute off the podium.

The Blitzboks‚ bronze medallists five years ago‚ got their Tokyo campaign off to a winning start by beating Ireland 33-14 in their tournament opener. They won the try count 5-2.

SA’s other bronze medallist from Rio‚ Henri Schoeman‚ limped out of the men’s triathlon early into the final running leg.

He had been in the lead group in the swim and on the bike‚ but the ankle injury that had plagued him recently had the final say‚ forcing him to withdraw.​

A constellation of drones form a globe at the Tokyo 2020 opening ceremony.
News
4 months ago

Sport stretched out over Tokyo on Saturday and gold medals rained down as the Olympic Games burst into life, finally casting aside some of the shadow ...
Sport
4 months ago

China’s Yang Qian won the first gold medal of the Tokyo Olympics on Saturday after prevailing in a battle of nerves with Russian Anastasiia Galashina ...
Sport
4 months ago