Chad le Clos bows out of the Tokyo Olympics tamely 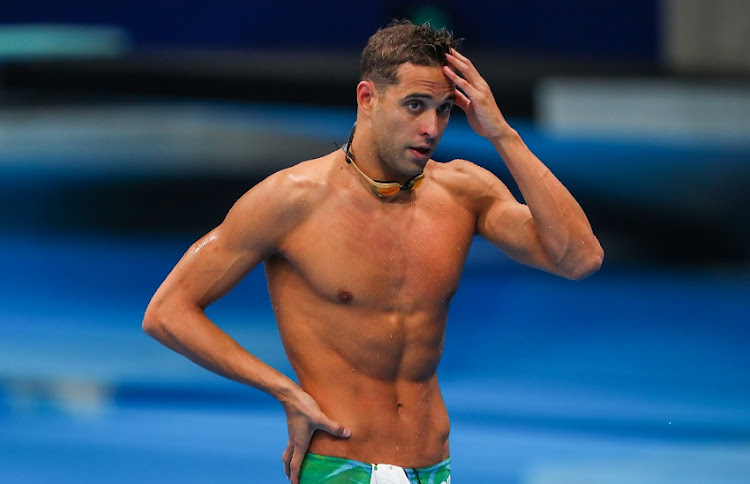 Chad le Clos of South Africa in the final of the men's 200m butterfly on day 5 of the Tokyo 2020 Olympic Games at the Tokyo Aquatics Centre on July 28, 2021.
Image: Roger Sedres/Gallo Images

SA’s most decorated Olympian, Chad Le Clos, bowed out of the Tokyo Games tamely on Thursday evening after failing to advance out of the 100m butterfly heats.

This was the first major gala in 10 years at which Le Clos, with four Olympic gongs and seven world championships medals under his belt, had failed to reach the podium.

The 29-year-old superstar, who finished fifth in the 200m ’fly final on Wednesday, touched sixth in his heat in 51.89sec, ending 18th overall, two spots and 15-hundredths of a second outside the top 16 competitors who progressed to Friday’s semifinals.

Le Clos, who shared the 100m ’fly silver at both London 2012 and Rio 2016, is one of only three men to have won multiple Olympic medals in this event over the years, along with American legends Michael Phelps and Mark Spitz.

Phelps made the podium four times but Spitz, like Le Clos, ascended only twice.

Phelps, Spitz and Le Clos — that’s one hell of a club to be in.

And nobody is going to join them this year at least; the only other Rio 2016 medallist in action on Thursday, defending champion Joseph Schooling of Singapore, failed to advance, clocking a distant 53.12.

But even the 51.75 he did in the Brazil preliminaries would have been one-hundredth of a second too slow for Tokyo.

That’s how much this event has improved in the past five years, considerably more so than the 200m race, where the bronze medal time in Tokyo was the slowest it’s been since Athens 2004.

This will be the fastest 100m ’fly in Olympic history to date. American Caeleb Dressel, holder of the 49.50 world 100m ’fly record, equalled Schooling’s Olympic mark of 50.39 to take the top seeding for the semifinals, ahead of 200m ’fly champion Kristof Milak of Hungary (50.62).

Three heat swimmers were under 51 seconds in Tokyo, while at the past two Games 51.14 and 51.44 were good enough for the podium.

Le Clos needed to match his 50.56 African record from 2015 to have challenged for a medal in this event. He was visibly disappointed — after all, he’s a racer and a competitor and he’s run out of races for now.

Next year he wants to win a fourth consecutive 200m butterfly crown at the Commonwealth Games, and he’s frequently spoken about the Paris 2024 Olympics.

Le Clos is a fighter and he will be back.

Another medal will come later in the day when Bianca Buitendag takes on top seed Carissa Moore in the women's surfing final.
Sport
6 months ago