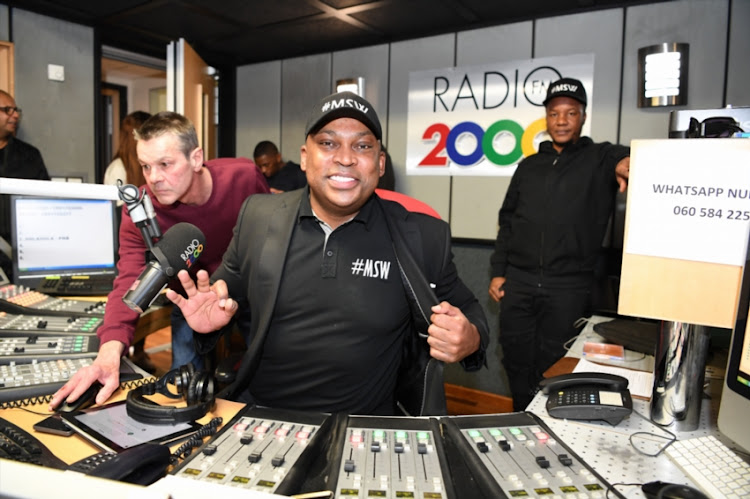 As has been his character when his relationship has turned sour with the SABC‚ outspoken sports presenter Robert Marawa has not gone quietly after a second sacking from the public broadcaster in four years.

The news of Marawa’s “departure” was broken in a statement by the SABC on Friday that the hugely popular host of Marawa Sports Worldwide (MSW) would part ways with the public broadcaster. Later on Friday Marawa did not hesitate to share a screenshot of the “SMS” he said was the mode of communication that fired him.

In another dramatic turn‚ Marawa Sports Worldwide (MSW) won the category for Best Sports Show: Commercial at the SA Radio Awards on Friday‚ on the same day Marawa was fired.

Marawa tweeted on Thursday that he was fired by SMS. His tweet was accompanied by an alleged screenshot of an SMS or WhatsApp message he received from a person identified as “Kina”‚ who apparently is Kina Nhlengethwa‚ whose LinkedIn profile states she is acting station manager at SAfm Radio.

So after serving the Public Broadcaster through time, I am sent yet another text from a person in an "acting" position informing me of this.👇🏾👇🏾
Same modus operandi as SS.

What do they fear about the last Show??

Thank you Mzansi for the love & support thru the years. #MSW 🙏🏾 pic.twitter.com/WIoqZpbFX0

Marawa tweeted: “So after serving the public broadcaster through time‚ I am sent yet another text from a person in an ‘acting’ position informing me of this.

“What do they fear about the last Show??

“Thank you Mzansi for the love & support thru the years. #MSW.”

The alleged screenshot of the SMS or WhatsApp message by Nhlengethwa states: “Hi Robert. The reason for my call earlier on was to firstly inform you about the press release that was going to go out earlier on.

“The second one was to inform you that you need not come in for the show today as there will be no MSW broadcast show tonight. Thank you.”

Thank u very much to those u've believed in our talent....🙏🏾🙏🏾 https://t.co/mTDHxTEDXX

The SABC had announced Marawa’s departure‚ along with that of Morning Live TV sports presenter Vaylen Kirtley‚ in a statement on Friday.

The statement read: “The SABC would like to announce the departure of renowned sports broadcasters Mr Robert Marawa and Ms Vaylen Kirtley.

“Robert Marawa departs following the conclusion of the MSW (Marawa Sport Worldwide)‚ which Marawa presented on both METRO FM and Radio 2000 simultaneously.”

On a day where we have been shown the door by the SABC & unceremoniously told NOT to do my last Show tonight!! #MSW wins the prestigious #Radioawards 🙏🏾

Marawa has had a chequered relationship with the SABC. He was fired from Metro FM in 2017 when he refused to return to his show in solidarity with his producer Beverly Maphangwa‚ who had been fired earlier. Marawa was reinstated by popular demand and tremendous public pressure.

Marawa was controversially fired by SuperSport as a TV sports anchor in 2019.

The SABC’s head of sport‚ Gary Rathbone‚ could not immediately be reached for comment.

"Robert Marawa is an undisputed heavyweight of sports broadcast," wrote one fan.
Sport
9 months ago

'Our prayers are with you': Well wishes pour in for Robert Marawa after Covid-19 health scare

Marawa issued a statement on Monday, revealing that he was recently diagnosed with Covid-19 and spent a week in ICU.
Sport
11 months ago

Popular sportscaster Robert Marawa has revealed that he battled Covid-19 for three weeks and his health deteriorated to such an extent that he spent ...
Sport
11 months ago

Robert Marawa on SuperSport return: 'I can't go back where I'm not wanted'

A Marawa and SuperSport collab? Nah fam, not going to happen.
Sport
1 year ago