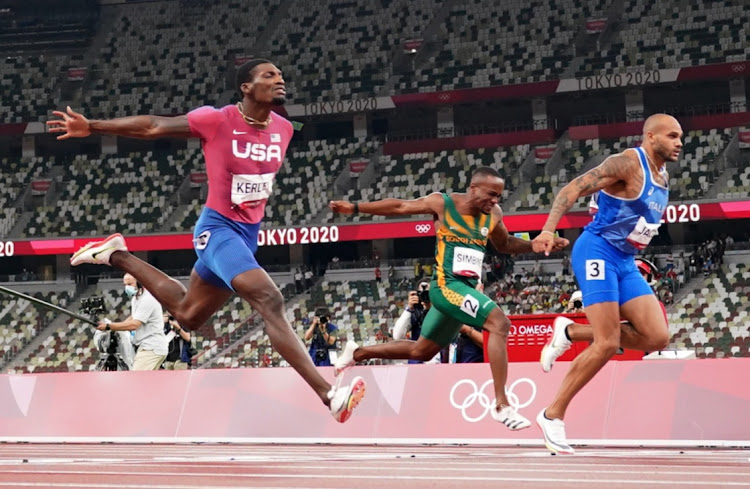 SA’s Olympic curse struck Akani Simbine in the men’s 100m at the Tokyo Games on Sunday night, condemning him to fourth place, the one position nobody wants, the so-called wooden medal.

The truth is that the speedster didn’t look comfortable on the day, having to qualify for the eight-lane final as a fastest loser after finishing fourth in his heat in 9.90 sec.

Italian Lamont Marcell Jacobs was the other fastest loser, but he rocketed through the final to win the crown in a 9.80 European record.

Simbine, who ran a 9.84 African record in Hungary last month, crossed the line in 9.93.

At Rio 2016 Simbine was fifth in 9.94. De Grasse was also third in that final, and at the 2019 world championships where he edged Simbine into fourth.

“It seems that Andre just keeps pipping me at the championships,” said Simbine, who seemed to lack the high-end speed he displayed just weeks ago.

“Their top-end speed is at another level,” he added, trying to take a philosophical approach to the result.

“It’s just a race, you know, it’s a final. The better man won on the day and I'm really happy for Jacobs. I’m disappointed in myself, but happy that I could make the final.”

It seems somehow unfair for Simbine, who has been more consistent than any other sprinter over the past half-decade. He is the only man to have made all the finals of major championships from Rio 2016 to the delayed Tokyo 2020 Games.

His fourth place on Sunday ensured that SA’s jinx has infected a 19th Games.

Five years ago there were four fourth places, including Chad le Clos in the 200m butterfly.

And if Simbine’s result wasn’t bad enough, there was more potential bad news for SA after Gift Leotlela went over at the end of his semifinal with what seemed like a hamstring injury.

If he is unable to run further, that could hurt SA’s medal prospects in the 4x100m relay.

Now Simbine must try lift himself up for that. “Looking forward to it. Just need some time to gather myself before I get back into it.”

SA athletes have won a medal at every Olympics since readmission at Barcelona 1992, but Wayde van Niekerk, who faces a tough 400m semifinal on Monday, could be track and field’s last chance of a podium position in Tokyo.

Earlier in the men’s 400m hurdles semifinals, Soks Zazini ran a 48.99 sec season’s best, but that was only good enough for sixth spot in a heat won by world record-holder Karsten Warholm in 47.30, ahead of American Rai Benjamin (47.37).

This was an event where SA men used to be prominent, with a full house of three entrants, but this year Zazini was the country’s sole representative.

Akani Simbine will shoot it out for the title of world’s fastest man later on Sunday afternoon after qualifying in the semifinals.
Sport
2 months ago

Defending champion Wayde van Niekerk admitted he had nerves after he ran a less-than-perfect race in the 400m heats at the Tokyo Games on Sunday.
Sport
2 months ago

Wayde van Niekerk begins the defence of his Olympic 400m crown at the Tokyo Games on Sunday insisting he is fit enough to slug it out for three full ...
Sport
2 months ago