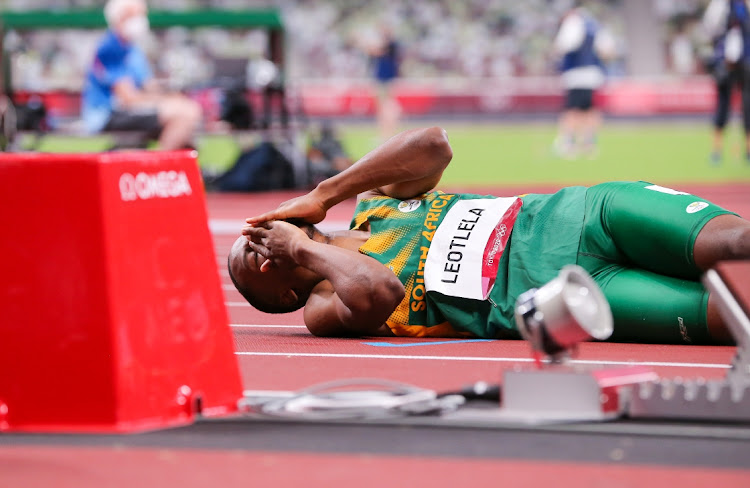 Team SA’s track and field squad has taken another blow with sprinter Gift Leotlela being ruled out of the rest of the Tokyo Olympics, leaving a massive hole in the men’s 4x100m relay team.

Leotlela, the country’s second-fastest athlete after Akani Simbine, went down injured at the end of his 100m semifinal on Sunday.

He tweeted early Monday: “And that’s it. TOKYO you’ve been amazing.”

TimesLIVE understands he hurt his hamstring, a recurrence of one of the injuries that have plagued him since 2016, although he had competed comfortably this year, clocking a 9.94sec personal best in Johannesburg earlier this year.

Leotlela was part of the team that won the men’s 4x100m crown at World Relays in Poland in early May, along with Simbine, who finished a painful fourth in the Olympic 100m final on Sunday night.

US-based Shaun Maswanganyi wasn’t part of that outfit, but he has run himself into relay contention after earning two individual spots in the SA Olympic team, in the 100m and 200m. He also made the 100m semifinals in Tokyo, going 10.10 after running 10.12 in the heats.

Gift Leotlela's triumphant return from four years' of injuries may have been overshadowed by sprint star Akani Simbine at the SA championships ...
Sport
5 months ago

But the absence of Leotlela, who clocked 10.03 in Sunday’s semifinal, leaves a major gap in the relay team, which finished fifth at the 2019 world championships.

Clarence Munyai has been a part of the outfit for a couple of years, but he’s been struggling with form this year, clocking 10.68sec in his last 100m race in Europe in July.

Relay coach Paul Gorries will surely have to call on at least one of his two reserves, Chederick van Wyk and Galaletsang Ramorwa, who have season’s bests of 10.22 and 10.24.

The men’s 200m kicks off on Tuesday with Maswanganyi, Munyai and Jobodwana in action.