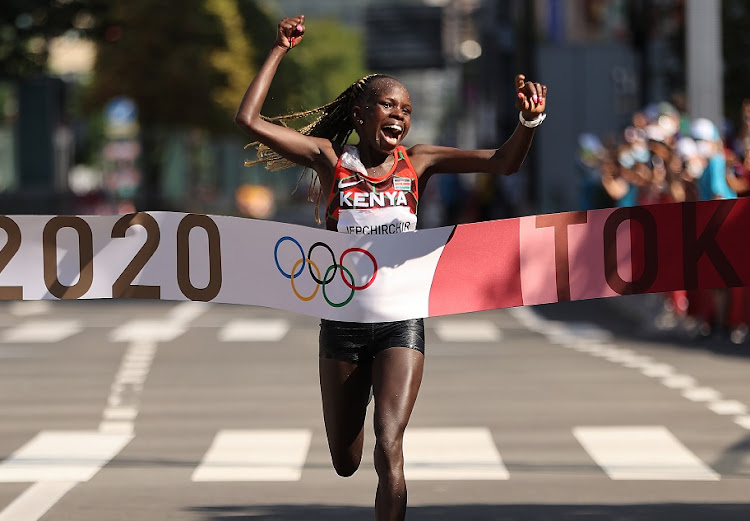 Peres Jepchirchir of Team Kenya celebrates as she crosses the finish line to win the gold medal in the women's marathon at Sapporo Odori Park in Sapporo, Japan on day 15 of the Tokyo 2020 Olympic Games on August 7, 2021.
Image: Clive Brunskill/Getty Images

Kosgei took silver and Molly Seidel of the US, competing in just her third marathon after moving up from shorter distances, claimed bronze.

Kenyans Kosgei, the world record-holder, and world champion Ruth Chepngetich had been favourites to win gold on Saturday.

But it was two-time world half marathon champion Jepchirchir who came out on top after breaking out of a virtual tie with Kosgei at the 40km mark where she decided to make her move.

“When I was there I said, wow, I’m going to make it. So I pushed the pace because I knew I was going to win,” Jepchirchir said.

“I’m so, so happy because we win as Kenya, first and second ... I’m happy, for my family, happy for my country Kenya for supporting us.”

Jepchirchir finished with a time of 2:27:20, 16 seconds ahead of Kosgei and 26 seconds in front of Seidel.

Kenya joins Japan as the only countries to win back-to-back gold medals in the event. It leads all countries with seven medals total since the women’s marathon joined the Olympic programme in 1984.

“I want to say thanks for my colleagues who trained with me, because I bring silver and my friend brings gold and we are really, really happy,” Kosgei said.

Seidel becomes the third American to medal in the event, after gold medal winner Joan Benoit in 1984 and bronze medallist Deena Kastor in 2004.

“Holy crap, those are women that I had on posters on my wall when I was a kid. It’s just something else,” Seidel said.

“To be able to be placed with them in US history, it’s just an honour.”

Battling hot and humid conditions, Chepngetich dropped out around the 30km mark, while Israel’s Lonah Chemtai Salpeter dropped out at the 38km stage after looking like a strong contender for bronze.

The race was moved to Sapporo from Tokyo ahead of the Games in an effort to beat the sweltering summer heat in the Japanese capital. But a heatwave has been sweeping the area, and even after rescheduling the race to begin an hour earlier at 6am, temperatures had climbed from 26°C at the start of the race to 30°C by 9am.

Sally Kipyego of the US, who was with the leaders’ pack at the midway point but finished more than five minutes off the lead, said the heat was “absolutely” a factor.

“I knew that I was really fit coming in, so that performance is nowhere close to my fitness. I know the heat had to play a role and I just thought I was going to cope better and I didn’t,” she said.

Sports minister Nathi Mthethwa says the team that SA sent to the Olympic Games in Tokyo does not reflect the demographics of the country.
Sport
10 months ago

Minster Mthethwa: ‘SA performed much below what was expected’ in Tokyo

Sports minister Nathi Mthethwa has described the overall performance of Team SA at the Olympic Games in Tokyo as having been below expectations.
Sport
10 months ago

SA’s highly fancied 4x100m relay team crashed out of the heats at the Tokyo Games on Thursday morning, failing at the first handover.
Sport
10 months ago