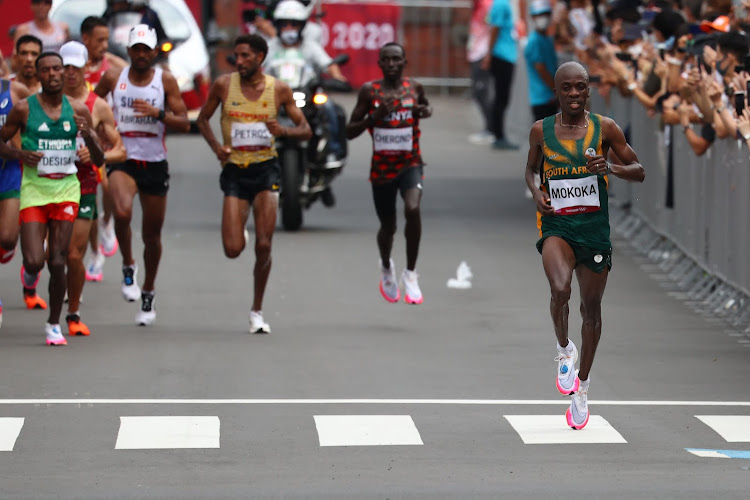 Stephen Mokoka burst into the lead briefly to take the field through halfway in 1hr 05min 13sec‚ but when Kenya’s world record-holder Eliud Kipchoge attacked soon after that‚ the South Africans were unable to punch back.
Image: REUTERS/Feline Lim

SA’s last hope of a fourth medal at the Tokyo Olympic Games faded quietly when Stephen Mokoka quit a little past the halfway mark of the men’s marathon on Sunday morning.

Mokoka‚ fifth at the 2019 world championships‚ and Elroy Gelant had stuck determinedly to the lead group for more than half of what turned out to be a brutal race with 30 runners failing to finish.

The third SA contestant in the field‚ Desmond Mokgobu‚ was never in contention.

Mokoka burst into the lead briefly to take the field through halfway in 1 hr 05 min 13 sec‚ but when Kenya’s world record-holder Eliud Kipchoge attacked soon after that‚ the SA duo were unable to punch back.

Gelant slipped off the pace quickly‚ and Mokoka‚ empty after his macho antics‚ was reduced to walking not long afterwards before pulling out.

Kipchoge sped up over the second half of the race to cross the line in 2:08:38 and win by 1 min 20 sec ahead of Abdi Nageeye of the Netherlands and Belgium’s Basir Abdi.

Gritty Gelant was the only of the SA trio to reach the finish line‚ crossing in 34th place in 2:16:43.

“It was a really difficult race especially taking the conditions into consideration‚” said Gelant.

“It was very‚ very humid.

“That’s the main factor that we actually struggled with ... Just after 28km the conditions just started to get a little bit more difficult in terms of the heat‚ difficult to breathe.”

The men’s marathon‚ SA’s last chance of silverware in Tokyo‚ served up the most famous of gold medals in Atlanta 25 years ago when Josia Thugwane won the closest Olympic 42km tussle in history.

But that was a distant memory on Sunday.

Even Team SA’s three medals from the opening week of this showpiece seemed an aeon ago.

Swimmer Tatjana Schoenmaker and surfer Bianca Buitendag had scooped silver on the fourth day of the Games‚ and then Schoenmaker struck gold in the 200m breaststroke on day seven‚ the first Friday of the Olympics.

From Saturday last weekend it was nine long days of vain hope‚ the longest medal drought since the 10 days SA waited for long-jumper Khotso Mokoena to secure the country’s only gong of Beijing 2008.

Tokyo was the first Games ever where SA men failed to medal‚ and the first since readmission where track and field was unable to make the podium.

Akani Simbine came the closest with his fourth spot in the men’s 100m‚ followed by Kyle Blignaut’s sixth in the shot put.

Elsewhere there were three fifth places — Chad le Clos in the men’s 200m butterfly‚ Kaylene Corbett in the women’s 200m breaststroke and the Blitzboks‚ one of Team SA’s biggest disappointments.

The men’s four rowers were the other big let-down‚ failing to make a final where two crews they’d beaten in Lucerne in May‚ Romania and Italy‚ took silver and bronze.

The key to Olympic success is stocking the team with as many medal contenders as possible; normally half of them convert.

But too many of SA’s hopes didn’t fire.

Surfer Jordy Smith pulled out of the Olympics because of an injury and golfer Louis Oosthuizen‚ in the top three at all four majors this year‚ didn’t make himself available for the showpiece.

Team SA had averaged five medals a Games in the seven Olympics since readmission‚ and the Tokyo haul has dropped that to 4.75.

It’s an underperformance‚ but don’t blame only the athletes.

The fault lies mostly with the sports administrators and politicians who have not delivered the support required by SA’s athletes.

The ball is in their court and Paris 2024 is beckoning.

What are the Olympics for? Maybe not what you think

The United States ended a drought and India seized their first ever gold medal  in athletics at the Olympics on Saturday, while baseball-mad Japan ...
Sport
1 year ago

The late Barbara Dowell, once the face of synchronised swimming in SA, was a wonderful raconteur with a library of anecdotes.
Sport
1 year ago

Two women, three medals. Unless one of the three men made the podium in the marathon early this morning, for the first time in SA Olympic history, ...
Sport
1 year ago

What was she wearing? Olympians take a stand against sexist outfit rules