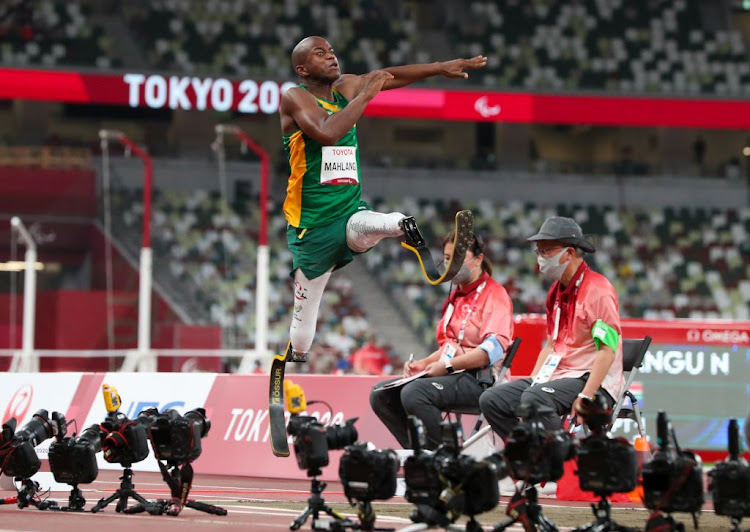 Ntando Mahlangu of SA wins the men's long jump T63 final during the evening session of athletics on Day 4 of the Tokyo 2020 Paralympic Games at the Olympic Stadium on August 28, 2021 in Tokyo, Japan
Image: Roger Sedres/Gallo Images

There were many people Ntando Mahlangu wanted to thank for his gold medal in the long jump on Saturday night, but he took the time to pay a special tribute to the hosts of the Tokyo Paralympics with a message on the artificial limbs that have helped him tread a different path.

“I wanted to dedicate the long jump to the people of Japan,” said double leg amputee Mahlangu on Sunday, when the magnitude of his last-jump victory on Saturday night had begun to settle on his 19-year-old shoulders and the tears he shed had all but dried.

Mahlangu began his thanks after the event, fist-bumping each and every one of the officials, sobbing, smiling and looking forward to his next event less than a week hence, the 200m.

His smile hid the small matter of a sore bum, on which he had landed on each of his six jumps to maximise the distance and, in a way, protect those prosthetics with the special message

In Rio in 2016, Mahlangu, who is part of the Jumping Kids programme that seeks to help overcome the cost of prosthetics for amputee children who cannot afford them, had the name of all who had helped the then 14-year-old on his journey inscribed on his legs. He had won silver in the 200m then, just four years after he had learnt to walk after spending the first 10 years of his life in a wheelchair.

He was born with tibial hemimelia, an extremely rare congenital condition that affects mobility in one in a million people. As a child, Mahlangu got around either by wheelchair or on his hands and knees. Nine years ago, he made the decision to amputate the legs that were holding him back. In 2021, that decision helped make him a one-in-a-million athlete.

“I went hard, sjoe, my bum is very sore from landing, but I got the gold medal and the world record and that’s great. It’s great positive news for SA,” said Mahlangu.

“After I jumped the 7m I got a bit too excited. I started to do other things. I was taking them slowly and my back wasn’t feeling great, but I didn’t want to tell my coach.

“Before the last jump I checked with my coach. He said that I should just stop what I’m doing and jump, but he told me in a straight way. I knew it was now or never. I was calm. I knew my last jump I’d give it my best. I said a prayer, ‘If this is the time, let’s do it ... if not, we take the next event.’ I think I was answered.”

Sunday was a day of reflection for Team SA after the gold rush of Saturday when Anrune Weyers galloped to gold in the 400m for single-arm amputees to join Mahlangu on the medal table.

Visually-impaired-runner Louzanne Coetzee and her guide Erasmus Badenhorst, made the Monday’s final of the 1,500m on Sunday. She is regarded as a favourite for a podium finish and one to add to the country’s tally.

Also on the track, Daniel du Plessis’s 11.72 was good enough for seventh, but not enough to make the final in the 100m for athletes with impaired motion below the knee.

There was disappointment for Wimbledon wheelchair tennis finalist Kgothatso Montjane and her partner, Mariska Venter, as they lost to Great Britain’s Lucy Shuker and Jordanne Whiley (6-2, 6-0), the second seeds in the tournament.

Ntando Mahlangu planning a surprise at the Paralympics: 'I have done something special'

At the 2016 Paralympics in Rio, Ntando Mahlangu, then just 14, bounced with giddy excitement on the podium on the two prosthetic legs that had not ...
Sport
1 month ago

Day three came and went without a medal for South Africa in sweltering temperatures at the Tokyo Paralympics‚ but records were broken‚ personal bests ...
Sport
1 month ago