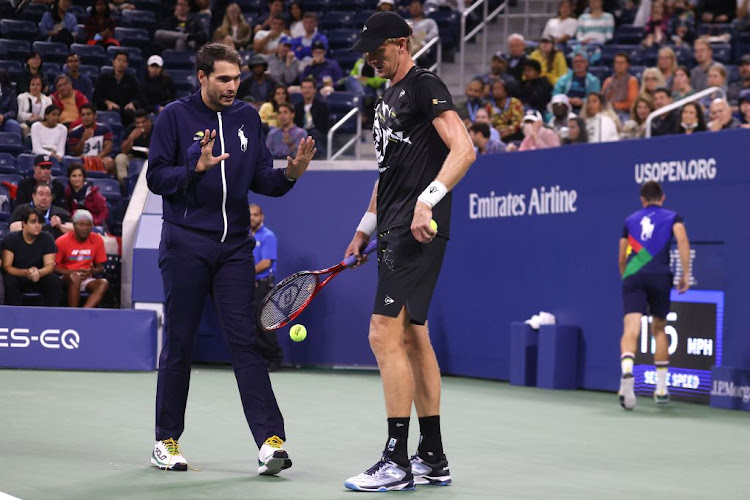 SA's Kevin Anderson discusses a wet spot on the court with an umpire during his match against Diego Schwartzman of Argentina at the US Open on Wednesday in the Flushing neighbourhood of the Queens borough of New York City.
Image: Al Bello/Getty Images

Severe weather in New York saw dozens of matches postponed at the US Open on Wednesday while the singles tie between Diego Schwartzman and Kevin Anderson was halted after a set and moved to a different venue as rain soaked the court and fans.

Schwartzman and Anderson traded early breaks in the first set before play was halted for over 30 minutes at Louis Armstrong Stadium as the venue’s retractable roof was unable to prevent rain being blown in sideways by strong winds.

Schwartzman then slipped during a tiebreak in the first set and called for chair umpire Nacho Forcadell, who inspected the court as fans donned plastic ponchos and held up umbrellas.

The court was wiped down with towels and play resumed after nearly 10 minutes, but officials then suspended the match and later announced it would resume at Arthur Ashe Stadium after the tie between Stefanos Tsitsipas and Adrian Mannarino.

Social media video posted online on the evening of September 1 shows multiple motorists stranded in their vehicles in Yonkers, New York, after getting caught in flash floods that pummelled parts of New Jersey and New York state.

“You guys call me when you’re ready to play tennis,” said South African Anderson, the runner up in 2017, before leaving the court.

The second-round match between former champion Angelique Kerber and Anhelina Kalinina, originally scheduled to begin after Schwartzman and Anderson, was pushed to Thursday.

The match between Tsitsipas and Mannarino was unaffected by the weather, with fans sitting comfortably inside the far more enclosed facility though rain drummed heavily on the roof.

Earlier in the day, more than two dozen doubles matches were postponed as the rain rolled in.

The National Weather Service issued a flash flood emergency advisory for the region, and parts of the plaza at Billie Jean King National Tennis Center were flooded.

SA tennis star Kevin Anderson says he is fit and ready to return to the top of his game as he prepares to make an 11th appearance at the US Open in ...
Sport
8 months ago

Russian second seed Daniil Medvedev stayed solid from the baseline against Frenchman Richard Gasquet to advance to the second round of the U.S. Open ...
Sport
8 months ago

Naomi Osaka and fans back for first day of US Open

Naomi Osaka returns to the Grand Slam stage at the US Open on Monday and the buzz will also be back with fans bringing the celebrated New York energy ...
Sport
8 months ago

U.S. Open says fans must have proof of Covid-19 vaccine for entry

Tennis fans 12 years or older will be required to show proof of a Covid-19 vaccine in order to attend the U.S. Open, tournament officials announced ...
Sport
8 months ago