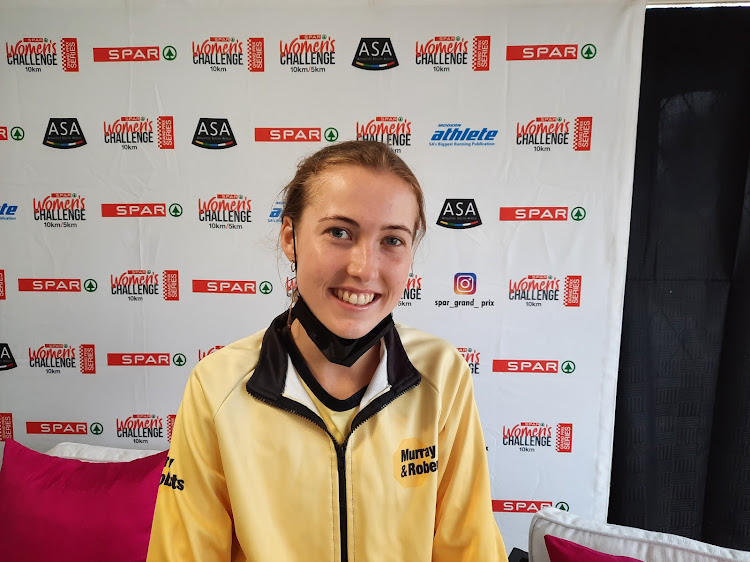 Tayla Kavanagh will be one of the runners to beat during the Cape Town leg of the Spar Grand Prix 10km race at Greenpoint on Saturday.
Image: Picture: Mahlatse Mphahlele

Attention will be on highly-promising 20-year-old runner Tayla Kavanagh during the Cape Town leg of the Spar Grand Prix 10km race at Greenpoint on Saturday morning.

The soft-spoken Kavanagh announced herself in spectacular style during the first race of the Grand Prix in Pietermaritzburg two weeks ago when she came out of nowhere to finish third after Tadu Nare and Glenrose Xaba for her first podium finish.

In a field expected to boast some of the best middle distance runners in the country and the continent, Kavanagh will be under pressure to produce another eye-catching run on the flatter course around Greenpoint, Granger Bay and Mouille Point .

“I am looking forward to the rest of the Spar races to continue testing myself against some of the best in the country and on the continent,” she said.

Kavanagh, who is in her first season in the senior ranks, said she didn’t expect to finish in the top three in Pietermaritzburg.

“I surprised myself by coming third in the race in Maritzburg but I am chuffed with my third position finish and I am looking forward to the second race in Cape Town and the rest of what’s ahead of me.

“Looking at the quality and experience of athletes who lined up in Pietermaritzburg, I definitely didn’t expect to finish on the podium but I am very happy I managed to surprise myself.”

In one of her first competitive senior races, Kavanagh said she focused on her own race in order not to be intimidated by more experienced athletes.

“In that race, I learned the importance of staying calm, having a positive attitude and being myself. The other important thing I learned was to run my own race and not to focus on anyone around me,” said Kavanagh, who comes from a background of cross country.

Some of the elite runners did not run in Pietermaritzburg and Kavanagh hopes they line-up in Cape Town.

“Hopefully some of the elite runners who did not make it in Pietermaritzburg will be able to run in Cape Town make for good competition. Competition is good because it pushes you as an athlete to run better and faster times.

“More competition will help me to see how much faster I can go compared to the other ladies, so it is great. I am going keep on trying my best and see what is going to happen when other athletes come to join us.”