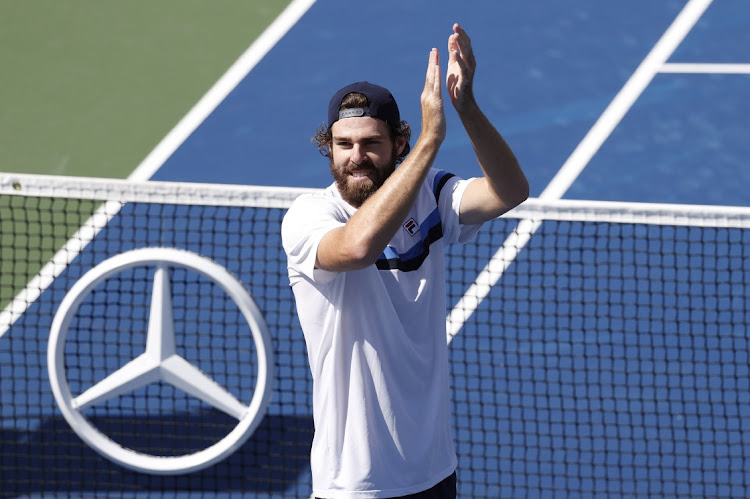 American Reilly Opelka hit out at the United States Tennis Association (USTA) on Saturday, calling his $10,000 fine by the US Open organisers for carrying an unapproved bag on court a joke.

The USTA ruled that the bag Opelka took to court on Thursday, during his second round win over Italian Lorenzo Musetti, included manufacturer logos that exceeded the approved limit of four square inches.

Opelka, the 22nd seed at this year's US Open, walked out for his match against Musetti with a pink tote bag bearing the name of a Belgian art gallery.

"I mean, what a joke on the US Open to do that. 10K for a pink bag? Come on," Opelka said after his third-round win over Georgia's Nikoloz Basilashvili.

"The head referee was telling me you should have come in and had this thing measured ... We had that logo specifically made.

"We measured. It is too big. It was not the same bag I was using at the French Open. We made the effort to make it smaller.

"There was a mistake in production, I think, because in Europe with the conversion, with what was allowed.

"But, yeah, I made the effort. The referee told me that it was too big and that was it. She said to cover one side of it."

Opelka also took a dig about the decision on Twitter: "US Open ticket sales must be struggling this year".

He said he was not aware of the fine, the highest at this year's US Open, until a journalist commented on it on Twitter.

"I didn't even find out from them, which is even more comical," he said, adding that other players have got away with much worse and smaller fines.

"I thought it was a bit harsh, a bit excessive. My job is not to measure logos. My job is to win matches. I have bigger things to worry about.

"I'd love to see (the amount) get donated elsewhere.

"We've had a few tragedies here in the States the last couple weeks. If they are going to take 10K from me, it better not go to a major corporation.

South African Lloyd Harris reached the fourth round of a Grand Slam for the first time on Saturday with a 6-4 6-4 6-4 victory over Canadian world ...
Sport
1 month ago

By saying no to a request to house 126 Afghan refugees, the SA government has placed their lives in danger, say lawyers acting on behalf of US-based ...
News
1 month ago

Ukrainian fifth seed Elina Svitolina said being married to fellow professional Gael Monfils was not a distraction but instead a source of motivation ...
Sport
1 month ago

Argentine Diego Schwartzman overcame big-serving Kevin Anderson of SA and multiple weather interruptions to move into the US Open third round with a ...
Sport
1 month ago