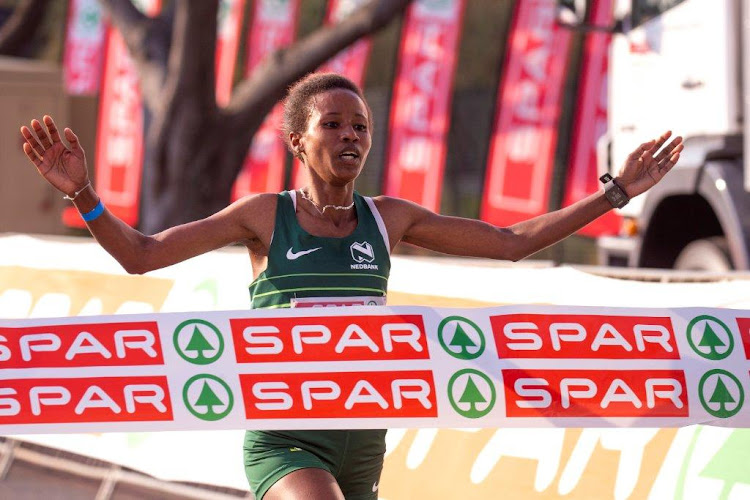 On Saturday, Nare, of the Nedbank team, won her third successive race of the series, finishing at Moses Mabhida Stadium in Durban in a time of 32 min 07 sec, ahead of second-placed Glenrose Xaba (32:59) of Boxer and third placed Gerda Steyn (33:07) of Nedbank.

The top five was completed by promising 20-year-old Tayla Kavanagh (Nedbank) 33:27 and Fortunate Chidzivo (Retail Capital) in time of 33:27 on what was largely a flat course.

With this win, Nare has tightened her grip on the series and is the favourite to win the grand prix with three races remaining in Tshwane, Johannesburg and Port Elizabeth in the coming weeks.

Nare said the Durban wind made her race difficult at the beginning.

“Because it was windy, I decided to start a little bit slower and stay with the rest of the group, which was a different strategy because in Pietermaritzburg and Cape Town it was not as windy as here in Durban.

“I wanted to run a fast time but it was hard to do it with the wind and with no other ladies pushing me in terms of pace. It wasn’t my plan to break 30 minutes because it is too fast, but my goal was to run under 31 minutes.

“I tried to do it in Cape Town but I was unsuccessful and because of the wind I couldn't do it today, but I will try to do it in Port Elizabeth whether there is wind or no wind.”

Xaba said the course was challenging.

“I am a little bit better with my injury, which made me miss the last race in Cape Town and some weeks of intensive training,” she said.

“The Durban course was a bit challenging but my run was good and it was nice to challenge the winner Tadu Nare and Gerda Steyn. I will continue to challenge Tadu until the last race.”

Steyn, who arrived in the country on Friday from Dubai, said she enjoyed the race.

“It was a fantastic run this morning and it was good to see Glenrose pushing me the way she did. I wasn’t sure whether I would be capable of running like I did this morning after only arriving on Friday from Dubai,” she said.

“It’s been a really fantastic morning out on the road and I am really happy with the result. Conditions were good. On Friday when I arrived in Durban I thought we were in for some trouble with the wind, but the wind was a lot calmer this morning.

“There was still a little bit of the wind but being able to run in the group with the other ladies helped a lot. I tried to tuck in behind them when there was a headwind and that helped a lot.”

Ethiopian Tadu Nare of Nedbank is running away with the Spar women’s 10km Grand Prix.
Sport
4 months ago

Attention will be on highly promising runner 20-year-old Tayla Kavanagh during the Cape Town leg of the Spar Grand Prix 10km race at Greenpoint on ...
Sport
4 months ago

Ethiopian middle and long distance runner Tadu Nare of Nedbank will be the athlete to beat in the Cape Town leg of the Spar Grand Prix 10km race at ...
Sport
4 months ago