Title rivals Verstappen and Hamilton collide and crash out 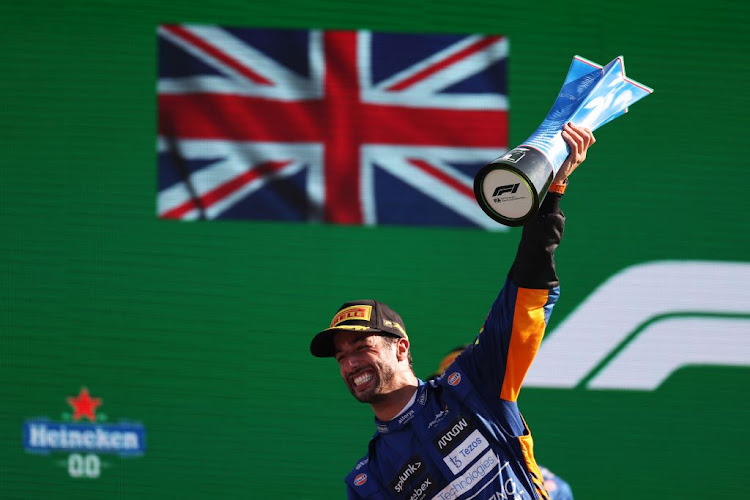 Race winner Daniel Ricciardo of Australia and McLaren F1 celebrates on the podium during the Formula One Grand Prix of Italy at Autodromo di Monza on September 12, 2021 in Monza, Italy.
Image: Lars Baron/Getty Images

Australian Daniel Ricciardo won the Italian Grand Prix in a stunning McLaren one-two at Monza on Sunday while Formula One title rivals Max Verstappen and Lewis Hamilton took each other out of the race.

The victory was McLaren’s first since 2012, the last being Jenson Button’s victory in Brazil in November of that year, and Ricciardo’s first since he was at Red Bull in 2018.

“About time,” smiled the happy Australian before performing his trademark ‘Shoey’ — glugging the podium champagne from his sweaty boot and sharing it with second-placed team mate Lando Norris and McLaren boss Zak Brown.

“To lead literally from start to finish, I don’t think any of us expected that,” he said.

“To not only win but to get a one-two, it’s insane. For McLaren to be on the podium is huge.”

Ricciardo, whose other seven wins were all with Red Bull, had started on the front row and seized the lead from Verstappen at the start and he completed his day with a bonus point for fastest lap and voted Driver of the Day by fans.

The result, on pace and merit, was a perfect reply from the Australian to his critics after struggling to get to grips with the McLaren since joining from Renault at the end of last year.

“For anyone who thought I’d left, I never left,” he said over the radio after taking the chequered flag. “I just moved aside for a while.”

Valtteri Bottas took third for Mercedes after winning the Saturday sprint race and then starting at the back of the grid due to engine penalties. The Finn finished fourth on track but Red Bull’s Sergio Perez ahead of him had a five-second penalty that dropped the Mexican down to fifth with Ferrari’s Charles Leclerc fourth.

While McLaren celebrated, Verstappen and Hamilton had nothing to smile about. The pair collided and crashed out after their pit stops, with Verstappen’s Red Bull lifting off the kerb and ending up on top of Hamilton’s Mercedes in the gravel, with the halo head protection device keeping the champion out of harm’s way.

Both climbed out after the accident at the first chicane, with Verstappen’s five-point lead in the championship unchanged.

“That’s what happens when you don’t give space,” said Verstappen on the team radio of what could be a defining image of the season and evoked memories of the famous late 1980s clashes between the late Ayrton Senna and Alain Prost.

“I was racing as hard as I could, finally got past Lando and was in the lead so they pitted me. The pit stop was slow, I lost a couple of seconds and I came out. Daniel came past, Max was coming.

“I made sure I left a car’s width on the outside for him, I went into turn one and I was ahead and going into turn two and then all of a sudden he was on top of me.

“He just didn’t want to give way today and he knew when he was going into two what was going to happen ... but he still did it,” the Briton told Sky Sports television.

The pair have collided before this season, notably at Hamilton’s own British Grand Prix, and Sunday’s latest clash will keep fans talking for some time. Ferrari’s Carlos Sainz was sixth with Lance Stroll seventh for Aston Martin and Fernando Alonso eighth for Renault-owned Alpine. George Russell, Hamilton’s team mate next year, took two points for Williams in ninth with Esteban Ocon 10th for Alpine.

Neither AlphaTauri finished, car troubles sidelining last year’s Monza winner Pierre Gasly after three laps while Japanese rookie Yuki Tsunoda did not start. It was the first time this season that the team had failed to score.

Hamilton and Verstappen collide and crash at Monza

Formula One could turn sprint races into stand-alone events next year with more points on offer and separate from Sunday's main grand prix, said ...
Motoring
1 week ago

Mercedes are open to compromise on Formula One's future engine rules to make it easier for the Volkswagen Group to enter the sport, motorsport head ...
Motoring
1 week ago