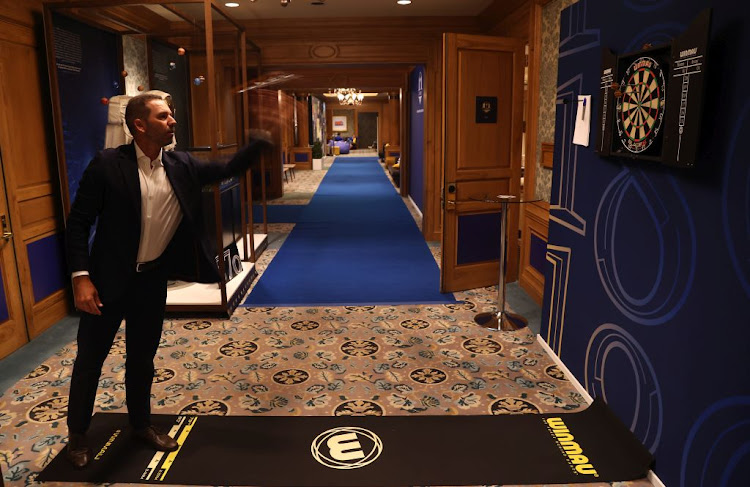 Sergio Garcia of the European Ryder Cup team plays darts at the official gala dinner in the team room at The American Club in Kohler, Wisconsin.
Image: Warren Little/Getty Images

The American wife of Spanish golfer Sergio Garcia has called on her compatriots to show European players respect during the Ryder Cup after being embarrassed by some US fans at the 2016 competition in Minnesota.

Angela Akins said she hoped there would be no repeat of the atmosphere when the event was last held in the United States at Hazeltine National Golf Club.

Europe have already launched a charm offensive at Whistling Straits, where they expect to face a hostile US home crowd when play begins on Friday in the biennial event.

"I understand cheering for your team but let's leave the insults out," Akins told CNN.

"It went too far at Hazeltine when I was following Sergio ... I ended up having a go at a group of guys who were barracking him. I said to them: 'I'm here supporting the European team. I'm an American and you're embarrassing me'.

"The people around us joined in and said: 'Yeah, you're embarrassing us too.'

"I said to the guys, 'I want to see American fans being better than that.'"

Europe are defending champions after winning in 2018, but the players will not have the usual army of fans to support them this year due to travel restrictions.

Everything stacked against Europe, says Poulter

Europe's Ryder Cup stalwart Ian Poulter said everything will be stacked against the holders when the eagerly-anticipated duel with the United States ...
Sport
9 months ago

Home advantage for a largely inexperienced US team versus European passion will be one of the compelling storylines in this week’s Ryder Cup between ...
Sport
9 months ago

Christiaan Bezuidenhout will be back at the Gary Player Country Club at Sun City to defend his SA Open title that carries a prize fund of US$1.5m ...
Sport
9 months ago