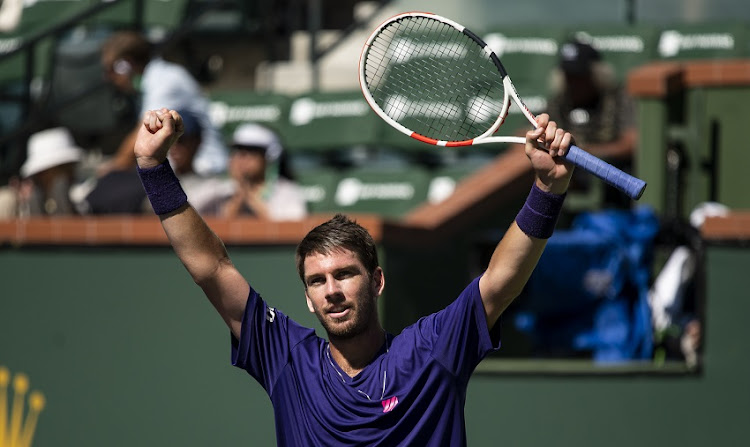 Cameron Norrie of Great Britain celebrates his victory over Diego Schwartzman of Argentina in the quarter finals of the BNP Paribas Open at the Indian Wells Tennis Garden on October 14, 2021 in Indian Wells, California.
Image: TPN/Getty Images

Becoming the British No. 1 is a "great bonus," Cameron Norrie said on Thursday, after stunning Diego Schwartzman 6-0 6-2 to reach his first-ever Masters 1000 semi-final at Indian Wells.

The 15th-ranked Schwartzman was heavily favoured against Norrie but had no answers in their quarter-final, as the 26-year-old picked up his 45th win of the year and is now set to crack the top 20 of the world rankings on Monday.

"Definitely my biggest match of my career," said Norrie, who picked up his first ATP title at the Los Cabos Open in July.

"Honestly out there, once the match begun, I was feeling very relaxed, and I was very in the present. I wasn't really thinking too much and just going out and playing just like another match."

It was the latest success for Norrie in a transformative year, after he defeated Wimbledon semifinalist Denis Shapovalov and world number five Andrey Rublev earlier this month en route to the San Diego Open final, where he lost to Norway's Casper Ruud.

He reached the finals of the Queen's Club Championships, Lyon Open and Estoril Open this year, as well.

"It was never really a goal of mine, but it's definitely a great bonus to be British No. 1," he told reporters. "I want to keep pushing. I think I've got a lot of things to improve on, but I think it's one of those things you've got to enjoy."

He next faces Bulgarian Grigor Dimitrov, who survived a third-set tiebreak against eighth seed Hubert Hurkacz in their quarter-final on Thursday, a day after he stunned number-one seed Daniil Medvedev.

"I'm just really pleased to be playing my best level at these bigger events. Just enjoying the process and enjoying playing the bigger matches," he said.

"There is always going to be a bigger match and a bigger opportunity. I was just happy with how I handled myself in terms of the situation today."