Hamilton starts on pole for Mercedes 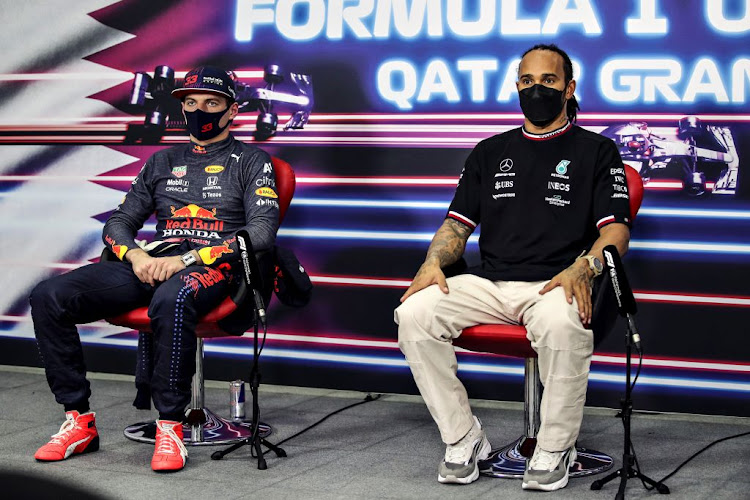 Pole position qualifier Lewis Hamilton of Great Britain and Mercedes GP and Max Verstappen of Netherlands and Red Bull Racing talk in a press conference ahead of the Formula One Grand Prix of Qatar at Losail International Circuit in Doha, Qatar.
Image: Florent Gooden - Pool/Getty Images

Formula One stewards handed a five-place grid drop to Red Bull's championship leader Max Verstappen at the Qatar Grand Prix on Sunday in a blow to his hopes of beating title rival Lewis Hamilton in the race.

AlphaTauri's Pierre Gasly joins Hamilton on the front row instead, while Bottas drops only to fifth due to Verstappen's penalty.

Verstappen is 14 points clear of Hamilton with three races remaining.

In another stewards' decision, Ferrari's Carlos Sainz was cleared of an alleged flag breach and no further action was taken.

The stewards found that Verstappen had failed to respect double yellow waved flags after AlphaTauri's Pierre Gasly had stopped on the pit straight with a broken front wing and puncture. Verstappen also had two penalty points imposed, taking his tally to four for a 12-month period.

Red Bull had sought to mitigate the penalty because trackside light panels were not showing the yellow warning, there was no in-car warning light and no audio signal from team to the driver.

The stewards said they had “sympathy” for the request but the rules stated the driver had to drive the car unaided while flags and lights carried equal weight.

They pointed out that Hamilton had been handed a three-place drop in Austria last season for breaching a single flag warning while Sebastian Vettel was given a five-place penalty in Bahrain this year for a double-flag offence.

“Accordingly, the stewards believe they have no option but to impose the standard penalty for a breach of the double yellow flag requirements,” a statement said.

Hamilton on pole in Qatar with Verstappen second

Seven-time Formula One champion Lewis Hamilton put his Mercedes on pole position for the inaugural Qatar Grand Prix with a dominant display under the ...
Sport
6 days ago

Mercedes Formula One team boss Toto Wolff declared the gloves were off as he and Red Bull rival Christian Horner engaged in more verbal sparring at ...
Sport
6 days ago