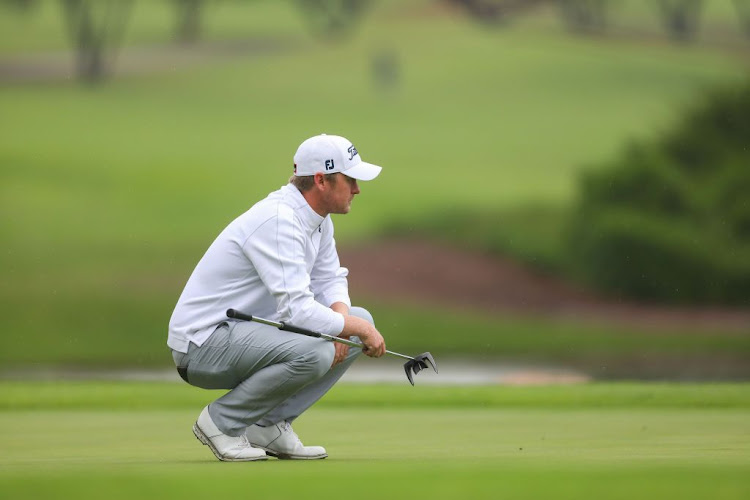 Justin Harding was literally quite calm in the midst of the storm as he signed off the third round of the SA Open with a four-stroke lead at the Gary Player Country Club on Sunday.

The third round had to be completed on Sunday morning after a big  thunderstorm hit Sun City on Saturday. Harding had five holes to play and birdied two of those in a composed finish that sees him top of the leader board on 13 under par following his 68.

“I played well on Saturday and with a hotter putter I could’ve probably shot a really low score. I had good distance control with my irons and put the ball in play off the tee — it was just really solid. I did more of the same on Sunday morning. I started off hitting it stone dead on 14 for birdie, and a good drive on 15 led to another birdie there,” said Harding.

His nearest challengers going into the final round are Hennie du Plessis, Daniel van Tonder and Oliver Bekker on nine under par. Du Plessis and Van Tonder signed for rounds of 70, and Bekker a 75.

GolfRSA amateur Yurav Premlall has done well to keep himself in the top 10 going into the final round. He finished off a round of 72 that puts him on five under par overall.

More rain is expected for the day, but Harding is determined to keep his game and emotions in check in the trying conditions as he chases this historic title.

“Being calm is key out there. This is a hard golf course. You’ve got to have good control of your game. Managing emotions is key to that, and that’s what we’ll keep trying to do this afternoon.”

In May Oliver Bekker embarked on an uncertain journey that kept him away from home for months on end and took him through incredible highs and a few ...
Sport
1 month ago

Oliver Bekker and Neil Schietekat lead the race to claim one of SA golf’s most coveted trophies after they opened with rounds of seven-under-par 65 ...
Sport
1 month ago

Among the strong field of South Africans in the SA Open taking place in Sun City this weekend, Dylan Frittelli is desperate to finally lay his hands ...
Sport
1 month ago