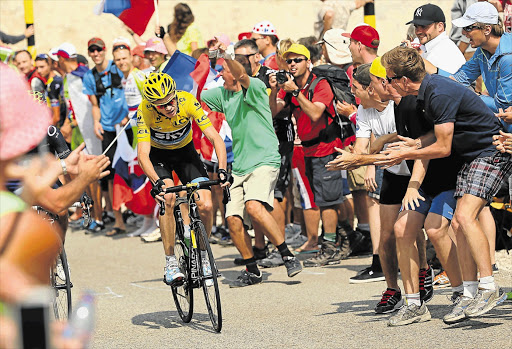 Chris Froome's preparations for the 2022 season have suffered a setback due to a knee injury, the four-times Tour de France champion said.

The Briton said scans had revealed damage to a tendon and he suggested the condition "flared up" due to his aggressive pre-season training routine.

"For the last 10 days or so I've been getting quite a lot of pain on the outside of my knee while I'm pedalling," Froome said.

"Unfortunately I think getting back into training these past couple of weeks I might have been a little bit too keen, pushing a little too much.

"I'm not too sure where I'm going to start the racing season. This is definitely going to push everything back slightly."

Froome spent more than three weeks in hospital after breaking his neck, femur, elbow, hip and ribs in a high-speed crash in 2019.

The 36-year-old competed in the Tour de France in 2021 with Israel Start-Up Nation, finishing in 133rd place.

Chris Froome has ruled himself out of contention for a record-equalling fifth Tour de France title later this month, saying he needs more time to ...
Sport
7 months ago

May the Brest team win, as the gruelling 23-day Tour begins in Brittany on Saturday
Sport
6 months ago