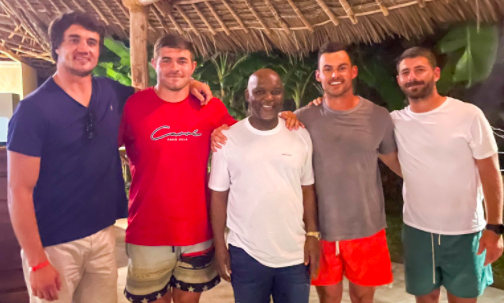 This week Mosimane, who is on holiday in Zanzibar, shared pictures of himself with Springbok players Willie le Roux, Franco Mostert, Jesse Kriel and Malcolm Marx.

“Great meeting our fellow South Africans making us proud in the world. Keep lifting our SA flag high,” he captioned the images.

Excited to meet the coach, Kriel responded: “Coach, great to meet you and your family.”

Coach, great to meet you and your family. 🤝🏆🇿🇦 https://t.co/kOneKwF25T

Mosimane is on a family vacation after securing his fifth trophy at Al Ahly, the Caf Super Cup, in December.

The Red Devils beat Raja Casablanca 6-5 on penalties in the final in Qatar.

Mosimane also won the 2020 Egyptian Cup at the club he joined from Sundowns in September 2019.

“I feel good. I must first thank the players because they are the ones who played,” Mosimane said in his post-match television interview.

“We did practice penalties, and we took them the same way we had practised.

“I must thank my players, my technical team and the supporters. I must thank captain Bibo [Ahly president Mahmoud El Khatib] and his board for their trust in me.”

A phenomenal @CAFCLCC campaign! It was a final like no other but we are proud of what our team has accomplished. Champions again!