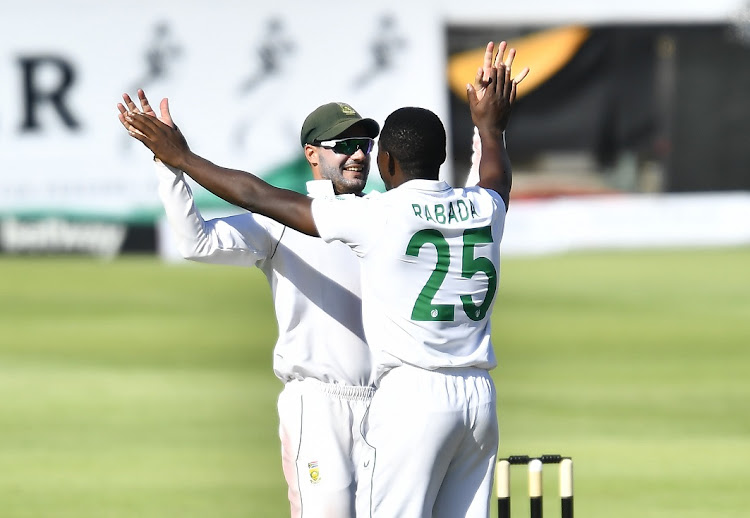 Kagiso Rabada of South Africa celebrates the dismissal of Virat Kohli of India on day one of the third Test at Newlands in Cape Town on January 11 2022.
Image: Ashley Vlotman/Gallo Images

Kagiso Rabada continued to grow his legend with another inspiring display as SA ended the first day of the deciding Test against India in a position of promise at Newlands.

They bowled out India for 223 after the visitors again won the toss and elected to bat.

India, however, struck before the close when Jasprit Bumrah had second Test hero Dean Elgar caught at slip for three. SA finished on 17/1.

They dismissed India cheaply after losing the toss, albeit under leaden skies and it was Rabada, as you'd expect, who led the attack in his 50th Test. He has blown hot and cold in this series but he has mostly sizzled since receiving a blast from captain Dean Elgar in the India second innings at the Wanderers.

He tore in from the Wynberg End, with the south-easterly mostly at his back, and proudly wore the mantle of leader of the pack as India struggled to make good on their first use of the pitch in the deciding Test.

And it wasn't just all-out aggression. This was a more calculated Rabada who kept plugging away in areas that served to disarm, and occasionally disconcert.

Only Bumrah was dismissed as a result of his wrath when the India paceman gloved the ball into a looping trajectory to Elgar in the slip cordon. He finished with 4/73 but failed to capture the last wicket of the innings that would have confirmed an 11th five-wicket haul.

Still, it was a performance that set the benchmark and others sought to emulate, and no-one did so with more alacrity than young buck Marco Jansen. The strapping left-armer continues to frequent the wickets column, this time returning figures of 3/55.

While Rabada did his damage from the southern end of the ground Jansen was rotated and bowled from both sides of the wicket. He profited from the change of angles.

SA's captain Dean Elgar says the third and final test against India at Newlands on Tuesday is his team's biggest match in 15 years as they look to ...
Sport
1 week ago

India's resistance almost solely came in the shape of their captain Virat Kohli who perhaps felt it was time to remind fans of his batting prowess.

Kohli, who is not at his free-flowing best, had to dig deep. His more inhibited approach may not have advanced the scoreboard early on but he stood resolute when those around him found ways to get out.

This wasn't so much the convulsions of a player riling against receding powers, as a batter calling on all his wherewithal, craft and bloody-mindedness to fashion an innings of substance.

Kohli judiciously left the ball for much of his innings and he rarely drew on the lavish stroke play that is such an integral part of his makeup.

He attempted to bat himself back into form by sheer occupation of the crease. Since registering a career-best 254 not out against SA in Pune in 2019 he has notched up just one ton — 136 against Bangladesh.

India reached tea on the first day of the deciding Test against SA having suffered two more setbacks, but it could have been a lot worse.
Sport
6 days ago

He has gone 25 innings since that century and he looked determined to again register three figures but it wasn't so much time as willing and able batting partners that conspired against him.

Running out of partners, his 201-ball vigil arrived tamely. He pushed at a wide-ish delivery from Rabada and was caught behind for 79. It was his highest score since scoring that ton against Bangladesh in Kolkata.

He was perhaps lucky to get that far. He survived an appeal for caught behind that proved one of the day's spikiest talking points.

SA's vociferous appeal was turned down by umpire Adrian Holdstock but they decided to take the matter on review.

There appeared to be a very faint sound when the ball passed Kohli's bat before it brushed his thigh pad on its way to the wicketkeeper. TV umpire Allahudien Paleker, however, ruled not out much to the disappointment, if not chagrin, of the home team.

In the absence of 'conclusive' evidence that Holdstock had erred, Paleker ruled Kohli not out.

Bowling all-rounder Chris Morris announced his retirement from cricket on Tuesday, calling time on a career which saw him represent SA 69 times ...
Sport
6 days ago