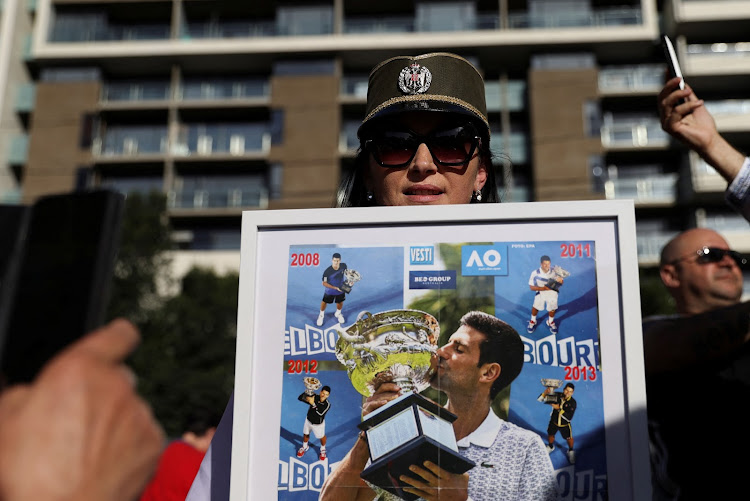 Tennis world No1 Novak Djokovic was included in the Australian Open official draw on Thursday, although uncertainty remained about whether the government will cancel the top seed's visa for a second time.

The 34-year-old defending champion, who was out practicing at the Rod Laver Arena earlier on Thursday, drew unseeded fellow Serb Miomir Kecmanovic for his opening round match, expected to be played on Monday or Tuesday.

Organiser Tennis Australia had delayed the official draw for more than an hour, without saying why.

The controversy has assumed an importance that goes beyond tennis: it has intensified a global debate over the rights of the unvaccinated and become a tricky political issue for Prime Minister Scott Morrison as he campaigns for re-election.

Novak Djokovic is likely to face hostility both on and off court if he is allowed to play at the Australian Open but a former member of the Serbian's ...
Sport
6 days ago

Australia is due to hold an election by May, and while Morrison's government has won support at home for its tough stance on border security before and during the pandemic, it has not escaped criticism over the botched handling of Djokovic's visa.

Morrison declined to comment on Djokovic's visa on Thursday.

Djokovic, a vaccine sceptic, fuelled widespread anger in Australia last week when he announced he was heading to Melbourne for the Australian Open with a medical exemption from requirements for visitors to be inoculated against Covid-19.

On his arrival, Australian Border Force officials decided his exemption was invalid and he was held alongside asylum-seekers at an immigration detention hotel for several days.

A court on Monday allowed him to stay on the grounds that officials had been "unreasonable" in the way they handled his interview in a seven-hour process in the middle of the night.

The government must now decide whether to let Djokovic remain and bid for a record 21st major title.

Nick Kyrgios said he was "embarrassed" by the way Novak Djokovic has been treated in Australia after the Serb won a court challenge to remain in the ...
Sport
1 week ago

Djokovic's cause was not helped by a mistake in his entry declaration, on which a box stating he had not travelled abroad in the two weeks prior to leaving for Australia was ticked.

In fact, he had gone to Spain from Serbia.

Djokovic attributed the error to his agent and acknowledged he also should have rescheduled an interview and photoshoot for a French newspaper on December 18 while infected with Covid-19.

Fans, including many Serbian Australians, gave him noisy support when he was detained.

Anti-vaxxers have hailed him as a hero and his family have portrayed him as a champion of individual rights.

But Djokovic may face hostility from the crowd if and when he walks out on court.

Novak Djokovic said "human error" was behind a mistake made on his Australian entry documents that breached the country's strict laws on reporting ...
Sport
6 days ago

There is widespread anger over the saga among Australians, who have a 90% vaccination rate among adults after enduring some of the world's longest lockdowns aimed at curbing the pandemic.

Crowds at the Open's main arenas will be capped at 50% capacity and masks will be mandatory for all spectators under updated Covid-19 restrictions announced on Thursday as authorities battle a surge of cases caused by the Omicron variant.

"I don't like his arrogance," Teyhan Ismain, a Melbourne resident, said on Wednesday.

"It does seem that he's been telling a few fibs too. So I think he should just probably go back."

There may also be resentment in the dressing room, where all but three of the top 100 men are inoculated.

"The bottom line is, sometimes your personal beliefs have to be trumped by what's good for the greater good, for those around you, for your peers," she told Seven's Sunrise programme.

"You have two choices, get vaccinated or just don't go play."

Tennis the menace: Djokovic is a lot of things, but he’s not a freedom fighter

World number one Novak Djokovic returned to training after being released from Australian immigration detention on Monday, posting a picture with his ...
Sport
1 week ago

The family of tennis' world number one Novak Djokovic said on Monday that "truth and justice" had won following the Serbian player's release from ...
Sport
1 week ago