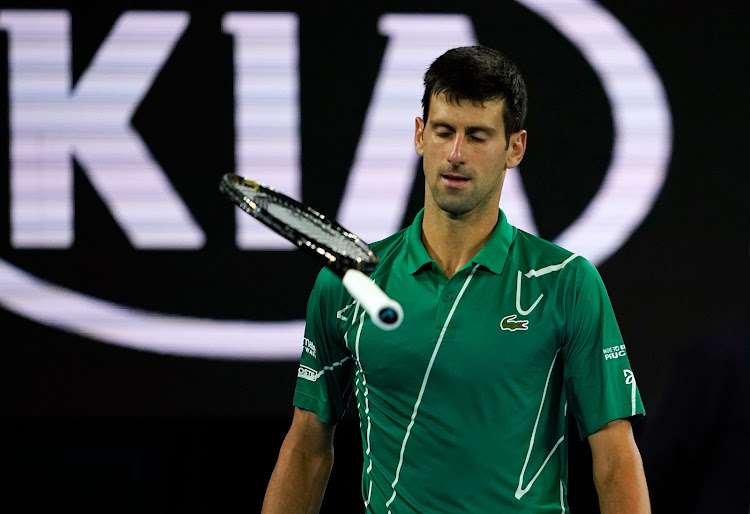 Tennis world number one Novak Djokovic said in a statement on Sunday that he was "extremely disappointed" with the decision to cancel his visa to enter Australia, but would cooperate with the authorities in relation to his departure from the country.

The Serbian champion said he hoped the focus would now return to tennis and the Australian Open Grand Slam, which starts in Melbourne on Monday.

Djokovic had appealed Immigration Minister Alex Hawke's decision to cancel his visa on the grounds that he was a threat to public order because his presence would encourage anti-vaccination sentiment amid Australia's worst Covid-19 outbreak.

"I will now be taking some time to rest and to recuperate, before making any further comments beyond this," the 34-year-old said in a statement after the court dismissed his case.

"I am extremely disappointed with the Court ruling to dismiss my application for judicial review of the Minister's decision to cancel my visa, which means I cannot stay in Australia and participate in the Australian Open.

"I respect the Court's ruling and I will cooperate with the relevant authorities in relation to my departure from the country."

Djokovic, who is not vaccinated against Covid-19, was granted a medical exemption to compete at the Melbourne Park major, a tournament he has won nine times including the last three editions.

His fate was finally decided after a rollercoaster 10 days that saw him detained by authorities, released and then detained again ahead of the Australian Open, which starts on Monday.

Rafa Nadal, who is tied with Djokovic on 20 major titles, said "too many questions" still needed to be answered concerning the Serb's bid to play the tournament, while other leading players lamented how Slam has been overshadowed by the saga.

"I am uncomfortable that the focus of the past weeks has been on me and I hope that we can all now focus on the game and tournament I love," Djokovic said, while also thanking those that supported him.

"I would like to wish the players, tournament officials, staff, volunteers and fans all the best for the tournament."

A court decision to uphold the cancellation of Djokovic's visa on Sunday has shaken up the Australian Open draw on the eve of the tournament, handing a boost to his rivals and adding intrigue to the race for the Grand Slam titles record.

The world number one had been favourite to win a 10th title at Melbourne Park and claim a 21st Grand Slam crown but the Serb now faces being deported from Australia.

Russian second seed Daniil Medvedev will now likely be the bookmakers' favourite when the tournament begins on Monday, ahead of third seed Alexander Zverev.

Sixth seed Rafa Nadal, who shares the men's Grand Slam record of 20 with Djokovic and the absent Roger Federer, could strike a blow in the major title race.

Nadal, the 2009 champion and a four-times finalist in Melbourne, would have had to face Djokovic in the semi-finals if the draw progressed according to seeding.

Australia cancelled Novak Djokovic's visa for a second time on Friday saying the world tennis number one who has not been vaccinated for Covid-19 may ...
Sport
5 months ago

The top quarter of the draw has now been thrown wide open, with Djokovic set to be replaced by a 'lucky loser' from the qualifying phase and with seventh-seeded Italian Matteo Berrettini left as the highest seed in the section.

The lucky loser will play Serbian Miomir Kecmanovic on Monday in the first round in place of Djokovic.

Rubbing salt into the wound, Djokovic's withdrawal could also mean losing his world number one ranking if Medvedev or Zverev claim his title at Melbourne Park.

Longer term, Djokovic's visa cancellation could further harm his chances of adding to his Grand Slam silverware, with the Australian government capable of imposing a three-year entry ban on the Serb.

His travel to other countries could also be affected, with most requiring visa applicants to disclose if they have ever been deported or had a visa rejected or cancelled.

Should Djokovic choose to remain unvaccinated for Covid-19, his entry into other Grand Slams may also be affected as authorities tighten travel and border restrictions in the third year of a pandemic that has killed more than 5 million people.

Novak Djokovic will spend Saturday night in immigration detention before the world's tennis number one seeks a court ruling to stop his deportation ...
Sport
5 months ago