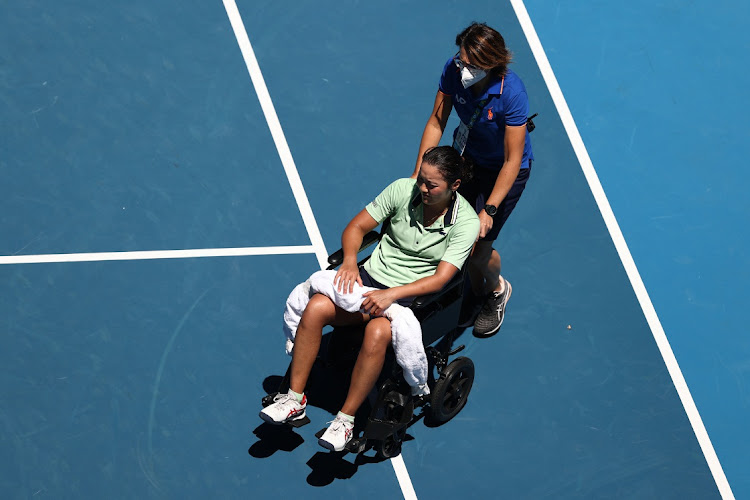 Harmony Tan is assisted from Margaret Court Arena after sustaining an injury in her second round singles match against Elina Svitolina during day three of the Australian Open at Melbourne Park on January 19, 2022.
Image: Cameron Spencer/Getty Images

France's Harmony Tan had to be assisted off court in a wheelchair at the Australian Open on Wednesday after suffering calf problems during her second round match against Elina Svitolina.

In her debut tournament at Melbourne Park, world number 107 Tan trailed 6-3 5-7 5-1 before she retired hurt from the early match at Margaret Court Arena.

"It was a rollercoaster match," 15th seed Svitolina told reporters.

"Of course, it's very sad to see her leaving the court in a wheelchair. It's never, never good to see a player getting injured."

Ukrainian Svitolina moved into a third round clash against twice champion Victoria Azarenka.

Naomi Osaka said she is enjoying her tennis again and is having fun on the Tour after the defending champion overcame an unexpectedly stiff challenge ...
Sport
5 months ago

Nadal cruises past qualifier Hanfmann into Australian Open third round

Rafa Nadal put on a clinical performance to ease past German qualifier Yannick Hanfmann 6-2 6-3 6-4 and reach the third round of the Australian Open ...
Sport
5 months ago

For moments during his riveting opening round win on Tuesday at the Australian Open, Andy Murray was under the impression that he was being booed by ...
Sport
5 months ago