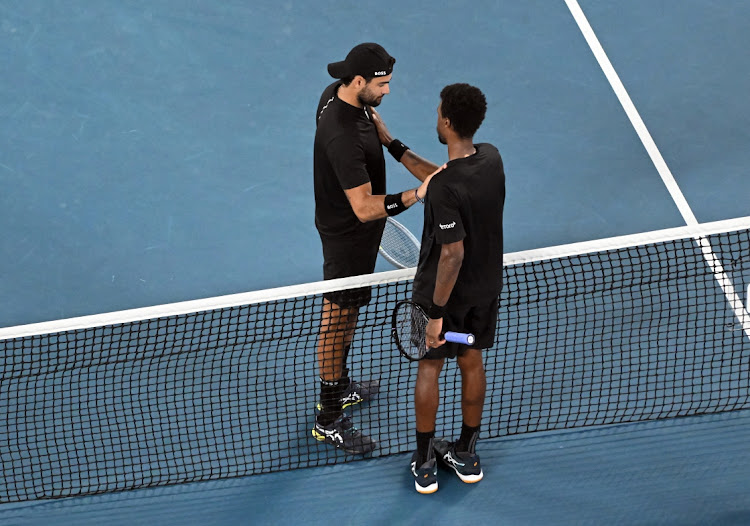 Matteo Berrettini is known as 'The Hammer' on tour for his crushing forehand.
Image: REUTERS/Morgan Sette

Seventh seed Matteo Berrettini found a higher gear in the face of a heroic fightback from France's Gael Monfils to script a 6-4 6-4 3-6 3-6 6-2 win on Tuesday and become the first Italian man to reach the Australian Open semi-finals.

The match was a repeat of the quarter-final clash from the 2019 US Open, which Berrettini won in a final-set tiebreak to reach his first major semi-final.

While it was slightly easier this time for the Italian, who also defeated Monfils when they met in last year's ATP Cup, he nonetheless needed every bit of his resilience and energy to edge past the gallant Frenchman.

Having wallowed in a "deep, dark pit of despair" last season, Madison Keys booked her first Grand Slam semi-final spot in four years on Tuesday with ...
Sport
5 months ago

"It feels unbelievable and hopefully tomorrow is gonna be a second one (Jannik Sinner)," Berrettini said on a floodlit Rod Laver Arena.

"I'm really happy for myself. What a great fight again against Gael. A great match, lot of emotions. I thought I had him in the third and then I found myself in the fifth.

"I really fought hard and I put everything on court. That's what I said to myself. And that's why I'm really happy."

The 25-year-old, who reached last year's final at Wimbledon, will take on 20-times major winner Rafa Nadal of Spain for a place in Sunday's final at the Rod Laver Arena.

Berrettini is known as 'The Hammer' on tour for his crushing forehand and he used his flat groundstrokes abundantly to pin his opponent back early on.

Rafa Nadal drew within two wins of a record 21st Grand Slam title on Tuesday after claiming a five-set thriller against Denis Shapovalov to grind ...
Sport
5 months ago

He also found his mark with his booming serves and there was very little Monfils, who had not lost a set coming into the contest, could do to stave off the onslaught.

Monfils had plenty of support in the stands, including wife and top women's player Elina Svitolina, and cries of 'let's go Gael, let's go' filled the air as they egged him on to prolong the contest.

The Frenchman tested Berrettini's mettle during the fourth game in the second set - which had 10 deuces and lasted over 20 minutes - but was unable to convert his three breakpoint chances.

The Italian made full use of the reprieve and broke Monfils in the seventh game and it proved enough for a 2-0 lead.

Berrettini had spent almost five hours more on court than his opponent and if he had hoped for an early finish on a warm evening, his hopes proved short-lived.

Monfils saved three breakpoints for a crucial 2-1 hold in the third set and a Berrettini double fault then gave him his first break of the match, which then went to a fourth.

A crunching forehand winner caught the back of the baseline and gave the Frenchman a break in the fourth set and he then levelled the match at 2-2 with a second break of serve.

Before Tuesday's match, Berrettini had won five of the six five-set matches he had contested and he showed why.

The Italian left the court for a change of clothes before the decider and broke Monfils' serve twice after his return to jump to a 4-0 lead in no time.

After an intense battle of three hours and 49 minutes and the clock closing in on 1 am local time, Berrettini sealed the contest on his third match point when Monfils found the net on a forehand return.

Fourth seed Stefanos Tsitsipas survived an attritional fourth-round battle with American Taylor Fritz on Monday, twice coming from a set behind to ...
Sport
5 months ago