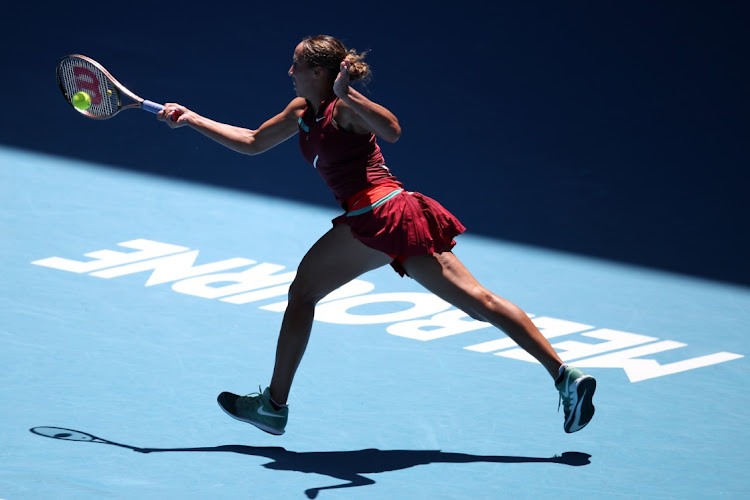 Having wallowed in a "deep, dark pit of despair" last season, Madison Keys booked her first Grand Slam semi-final spot in four years on Tuesday with a 6-3 6-2 upset of Barbora Krejcikova at the Australian Open.

Keys' renaissance after a dismal 2021 season has lit up Melbourne Park this year, and at a baking hot Rod Laver Arena fourth seed Krejcikova became another casualty of the American's new-found confidence and traditional firepower.

Keys told an on-court interviewer she thought she might cry.

"It means a lot. Last year was really hard and I did everything that I could with my team to just really reset this off-season and focus on starting fresh and new and really just starting from zero and not worrying about last year.

"Wow, that's gone well so far. I'm really proud of myself and so thankful to my team and my friends and my family for helping me through what was a really tough year last year."

Banging down back-to-back aces to claim the first set, Keys roared to a 3-0 lead in the second before a rare wobble on serve gifted French Open champion Krejcikova a break.

Unbowed, Keys unleashed a blistering forehand return winner down the line to break back and sealed the match with a thumping first serve that Krejcikova could only push long.

The 26-year-old booked her second Australian Open semi-final, seven years after making the last four at Melbourne Park as a 19-year-old sensation.

That year, it took Serena Williams, the eventual champion, to stop her.

Williams said after the victory it was an honour to play "someone who will be number one in future".

It has not quite gone to script, with Keys now carrying a ranking of 51 and still searching for an elusive major title four years after Sloane Stephens denied her in the 2017 U.S. Open final.

She will need to beat either Australian top seed Ash Barty or compatriot Jessica Pegula to reach the final but with her bazooka forehand and her serve firing, she will hope to trouble either.

Krejcikova held firm for a few games but as five break points piled up at 3-2 in the first set, she finally buckled on serve, pushing a simple forehand into the tramlines with an open court begging.

In a flash the Czech was 5-2 down and calling for the trainer despite showing no signs of physical problems.

The delay failed to slow Keys' momentum, and she served out strongly to take the set in a four-game burst that unlocked the match.

With Krejcikova struggling in the heat, Florida-based Keys upped the ante and battered the Czech into submission with a string of blazing forehands.

"I'm pretty used to (heat) just because I train in that all of the time, which I think is definitely a bonus for me -- even though in the summer I wish I didn't live there and I lived somewhere nicer."

Krejcikova said that while the conditions had affected her performance she did not want to take credit away from Keys.

"I didn't feel good," she said. "It was the heat with some physical conditions that started to bother me after five games... I wanted to finish the match, to try to do my best. I wasn't really able to do that.

"I really don't want to take the victory from Madison ... she really deserves the win and deserves to get the credit."

The "Special K's" circus rolled on in the Australian Open doubles on Sunday, and according to ring-leader Nick Kyrgios and fellow showman Thanasi ...
Sport
5 months ago