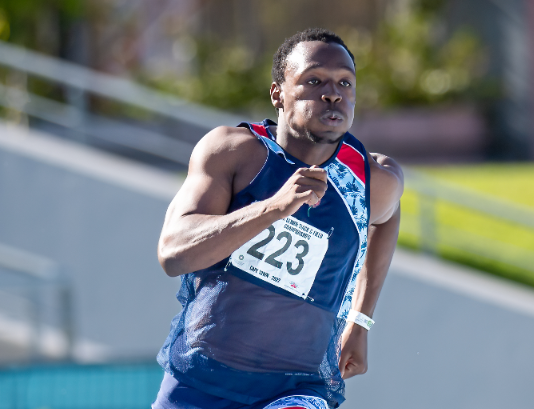 Marioné Fourie stormed to victory in the women’s 100m hurdles in Cape Town on Friday, but the black southeaster that blew and spat into the Green Point stadium put a damper on proceedings.

Fourie clocked 13.43 sec into a head wind of 2.7 metres per second, but a little earlier the wind, swirling in from the opposite direction, assisted Clarence Munyai to an impressive 20.03 effort in the 200m semifinals.

The 2.3mps tail wind denied him what would have been a world championship qualifying time in the longer sprint, but he still goes into Saturday’s final against Luxolo Adams as the favourite.

Adams, with a 20.01 best in Paarl in 2018, is the quickest South African over the distance at sea level. He won his semifinal in 20.31 and will run on the inside of Munyai in the final, what promises to be an interesting contest, even without the injured Wayde van Niekerk.

Fourie, 19, was in a class of her own as he won her race by more than half a second to underline her ability and potential.

“The wind was a little bit hard, but that’s not the end of the world,” she said afterwards.

But she and her rivals — and all other track athletes, for that matter — fell victim to the chilly conditions and crazy officiating here.

Normally the competitors are allowed to remove their tracksuits at the starting blocks, but in Cape Town they’re made to strip down to their competition gear of vests and shorts in the call room.

And the gap from then until the gun that starts their races is close to 20 minutes.

“Yes, it was [difficult to keep warm] because I started to get a little bit cold and you can’t do a run-through because your muscles are going to get tired,” Fourie said in response to a question on the issue.

“There’s a Nigerian girl [scheduled to be at the continental showpiece] and I hope she can push me to run a sub-13 ... My aim is to qualify for world champs.”

Kyle Blignaut held on to his SA shot put crown with a heave of 20.09m, the only effort of the day that went over 20m.

“I’m happy with a 20 again, but I feel my season doesn’t want to get started,” said Blignaut, who finished sixth at the Tokyo Olympics.

“We have a couple of weeks off before African champs so me and my coach are going to go back to the drawing board and hopefully figure a few things out that’s just missing this season.”

He is looking for victory in Mauritius. “I really want to win that one this year, I haven’t won an African title yet. My plan is to go to African champs with a 21.50 mindset.”

The 22-year-old, who struggled with injury early in the season, is also looking to make the podium at Commonwealth Games from July 28 to August 8, and to reach a final at the world championships.

But he has yet to throw a 21.10 to book his spot there automatically.

“There’s still four, five months left in the season, so I can still improve.”

In the men’s high jump, veteran Mpho Links cleared 2.25m to secure victory over 18-year-old schoolboy Brian Raats, who managed a best of only 2.16.

Wayde van Niekerk has pulled out of the SA championships in Cape Town because of injury, TimesLIVE has been told.
Sport
2 months ago

Akani Simbine won SA 100m crown No 6 in Cape Town on Thursday, but it was his most emotional by far, breaking down in tears in a media interview soon ...
Sport
2 months ago

A flood of entries has forced the Comrades Marathon Association (CMA) to push its entry cap from 15,000 to 20,000 runners.
Sport
2 months ago