Draw opens up for Swiatek as Sakkari loses, Raducanu also bundled out 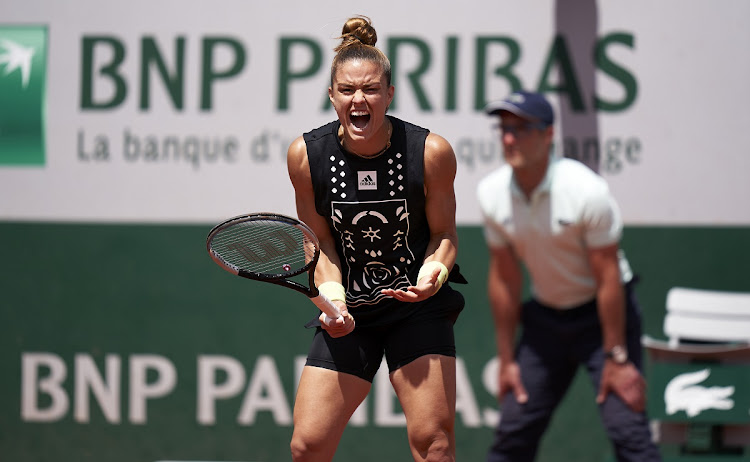 Maria Sakkari of Greece reacts against Karolina Muchova of Czech Republic in their second round match on day four of the 2022 French Open at Roland Garros in Paris on May 25 2022.
Image: Tnani Badreddine/Quality Sport Images/Getty Images

Another obstacle in top seed Iga Swiatek's path to a second French Open title was removed on Wednesday as fourth seed Maria Sakkari was knocked out 7-6(5) 7-6(4) by Czech Karolina Muchova in the second round at Roland Garros.

Sakkari, a semi-finalist in Paris last year, never found her groove on Court Suzanne Lenglen as her opponent, who reached the Australian Open semis last year, set up a meeting with American Amanda Anisimova. The Greek was the latest high seed to exit after Tunisia's Ons Jabeur (6) and defending champion Barbora Krejcikova (2) were knocked out in the first round.

World number one and red hot favourite Swiatek and third seed Paula Badosa are the only two players from the top six left in the women's draw.

“It's very special. It was a big fight it was a big test for me, a challenge and I'm happy I won in two sets,” said Muchova, whose last 12 months have been hampered by injuries.

Sakkari, who had struggled in the first round against French hope Clara Burel, was outplayed initially and fell 5-2 down. Facing two set points at 40-15, she briefly found her range and her opponent got tight, allowing the Greek to reduce the arrears.

Serving for the set, Muchova double-faulted twice to allow Sakkari to level and the Czech wasted two more set points at 6-5 before producing a backhand winner to win a tight tiebreak.

Sakkari dug deep in the second set to recover a break of serve for 4-4 and saved break points with powerful groundstrokes as the match headed into a second tiebreak. Muchova opened a 3-0 lead but got tight again, allowing her opponent to level at 4-4, but she regained her poise to wrap up victory with a forehand winner.

Sakkari was frustrated she could not turn things around and believes her physical condition could help her achieve better results if women played the best of five sets like the men.

“It would be amazing for me because I feel like my physical part is my strength,” the world number three said.

“But the tournament is never going to end, so we're going to have to stay here for a month or build 15 more courts. So I don't think that's ever going to happen because the calendar has to be shorter.”

US Open champion Emma Raducanu was bundled out in the second round, losing 3-6 6-1 6-1 to inspired Belarusian Aliaksandra Sasnovich.

The 12th-seeded Briton, who had to dig deep in her opening match to come from a set down to beat Czech qualifier Linda Noskova, was initially surprised by world number 47 Sasnovich's attacking power. Sasnovich was hitting the ball early, moving the Briton across the court before 19-year-old Raducanu responded in kind with some aggressive hitting.

After dragging her opponent wide of the court she earned a key break to lead 4-2 and bagged the opening set when she fired a superb cross-court winner. Undaunted, Sasnovich raised her game in the second set to race into a 4-0 lead.

The Belarusian, who had never gone past the second round in Paris, bagged the second with yet another break and then fought off multiple break points early in the deciding set before breaking for 3-1 when Raducanu sent a wild forehand five metres over the baseline.

Raducanu, who only played on clay professionally for the first time last month and had been struggling with a back injury in recent weeks, could do nothing to turn the tide. A dominant Sasnovich put her out of her misery with a sizzling backhand down the line on her first match point after two hours.

Holder Djokovic eases past Nishioka into round two of French Open

World number one and holder Novak Djokovic cruised past Japan's Yoshihito Nishioka 6-3 6-1 6-0 on Monday to advance to the French Open second round ...
Sport
2 months ago

Barbora Krejcikova's French Open title defence ended in the opening round on Monday as local hope Diane Parry was roared to a 1-6 6-2 6-3 victory ...
Sport
2 months ago

Alcaraz bulldozes past Lorendo to reach French Open second round

Teenage sensation Carlos Alcaraz steamrolled past Argentine Juan Ignacio Londero 6-4 6-2 6-0 to kick off his French Open campaign in solid, although ...
Sport
2 months ago

World number two Daniil Medvedev showed no signs of discomfort from his recent hernia operation, kicking off his French Open campaign with a ...
Sport
2 months ago