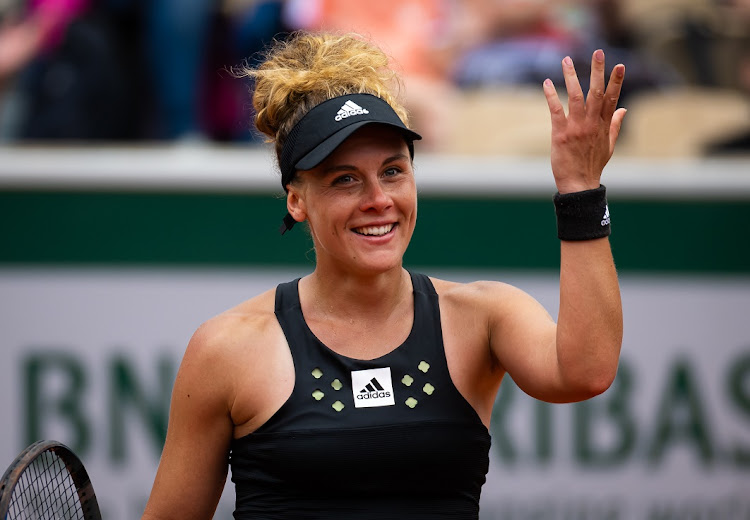 Leolia Jeanjean of France in action against Karolina Pliskova of the Czech Republic in her second round match on day 5 of the French Open at Roland Garros on May 26 2022.
Image: Robert Prange/Getty Images

French wildcard Leolia Jeanjean caused a major upset at the French Open when she destroyed former world number one Karolina Pliskova 6-2 6-2 in the second round on Thursday.

The 26-year-old Jeanjean is a former big hope of French tennis who ended up living on minimum wage after a knee injury suffered when she was 15 kept her off the courts for two years.

Dropped by Nike, who had given her a 10-year sponsorship deal, and by the French federation, who had assigned her a full-time coach when she was 12, Jeanjean went to study in the US at the Lynn University in Florida.

She came back to tennis after five years in the US only for her return to be slowed down by the Covid-19 pandemic.

"I lived on minimum wage and I didn't live from day-to-day, but week after week. I put all the money I had into a week's worth of tournaments and if they went well I got another week, but if they went badly I didn't play for two months because it was financially impossible," she said.

whose early rise had drawn comparisons with Martina Hingis, will next face Russian Ekaterina Alexandrova, the 30th seed, or Romania's Irina-Camelia Begu.

Third seed Paula Badosa outlasted Slovenia's Kaja Juvan before making sure of a third round spot with a 7-5 3-6 6-2 victory.

Badosa, a former junior champion in Paris, was made to work much harder than in her opening round where she had spent less than an hour on court.

"It was a very touch match and I expected a match like this," Badosa said. "I still need matches here to feel a little bit better."

"I was nervous and stressed. She was running, getting all the balls. In that moment I tried to stay as calm as possible and play aggressively."

Daniil Medvedev still has issues with claycourt tennis, but the world number two cantered into the third round with a 6-3 6-4 6-3 win against Serbian Laslo Djere.

The Russian, who reached the quarterfinals at Roland Garros last year after four consecutive first-round exits, struggled at times but his elasticity eventually made up for his lack of natural ability to move around on the slow surface.

Medvedev found himself down a break in the first set but his brilliant defence helped him claw his way back both times on court Philippe Chatrier. He will next meet 28th seed Miomir Kecmanovic of Serbia.

Medvedev, who won the US Open last year and was runner-up at the Australian Open this season, arrived at the French Open with only one match on clay under his belt after undergoing a procedure to treat a hernia in April.

Draw opens up for Swiatek as Sakkari loses, Raducanu also bundled out

Another obstacle in top seed Iga Swiatek's path to a second French Open title was removed on Wednesday as fourth seed Maria Sakkari was knocked out ...
Sport
1 month ago

Holder Djokovic eases past Nishioka into round two of French Open

World number one and holder Novak Djokovic cruised past Japan's Yoshihito Nishioka 6-3 6-1 6-0 on Monday to advance to the French Open second round ...
Sport
1 month ago

World number two Daniil Medvedev showed no signs of discomfort from his recent hernia operation, kicking off his French Open campaign with a ...
Sport
1 month ago

Barbora Krejcikova's French Open title defence ended in the opening round on Monday as local hope Diane Parry was roared to a 1-6 6-2 6-3 victory ...
Sport
1 month ago