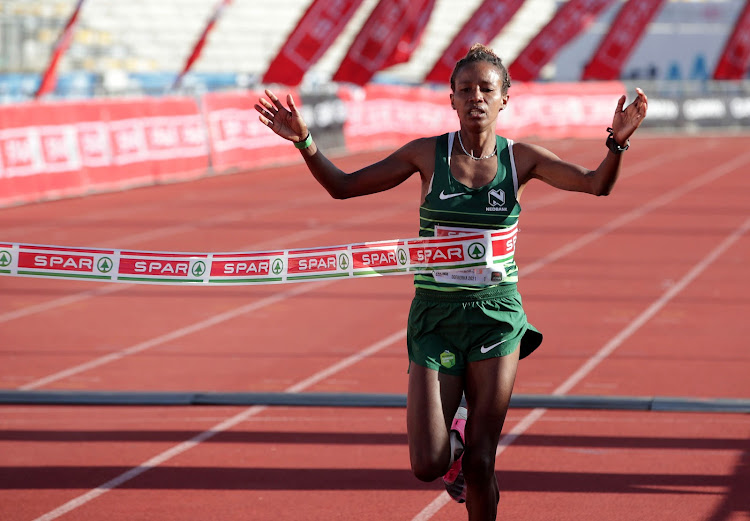 Ethiopian Tadu Nare will be looking to defend her SPAR Women’s 10km Challenge which which starts in Gqeberha on Saturday.
Image: Reg Caldecott

The SPAR Women’s 10km Challenge returns to action in Gqeberha on Saturday with a strong field that includes two recent Grand Prix winners — Helalia Johannes of Namibia and Tadu Nare of Ethiopia.

The season opening race, which includes international and domestic road running stars looking for a good start, takes place at the at Nelson Mandela University.

Now a veteran, Johannes earned maximum points to win in 2019, but she missed last year’s series and Nare took over with a clean sweep of spectacular victories.

Because of her impressive performances in the 10km Challenge, Nare went on to win her maiden international marathon in Barcelona and she will be brimming with confidence.

The tussle between Johannes and Nare should be thrilling and this season spectators should look out for another Ethiopian runner, Selam Gebre, who will be making her Grand Prix debut and could cause upsets.

Other runners expected to raise their hands during the Grand Prix are former winners Irvette van Zyl, who finished second in the Two Oceans ultra-marathon in April, and Kesa Moletsane.

Other runners to watch are SA rising stars Tayla Kavanagh and Cacisile Sosibo, the Phalula twins Diana-Lebo and Lebogang who are reported to be back at their best, and Zimbabwean runner Patience Murowe.

After being crammed into eight weeks in 2021, the series returns to a calendar where the six races are spread out over a period of five months, giving the runners time to recover between races.

The system of bonus points has also been reintroduced, which should make competition even fiercer, with the emphasis on fast times.

Though not back to the format of previous years when thousands of women took part in each 10km Challenge race, the events this year have been opened to 500 runners.

“Now we have the even greater privilege of hosting the opening event of the 2022 series. In 2021 we were blown away by the quality of the runners and particularly by Tadu Nare’s dominance, which sadly was blunted by strong Gqeberha winds.

“This year we are hoping for a calm, wintry morning, with a route that should produce records and personal bests. SPAR’s flagship sponsorship, the SPAR Women’s 10km Challenge, has created an opportunity for us to celebrate women: their beauty, their power and their courage, and at the same time to underline SPAR’s commitment to raising awareness of gender-based violence,” said Stapleton.

Organisers of the hugely popular Spar Women’s 10km Challenge have announced that this year's Grand Prix has been cancelled due to the Covid-19 ...
Sport
2 years ago