Coco Gauff: Iga Swiatek is 'on another level' 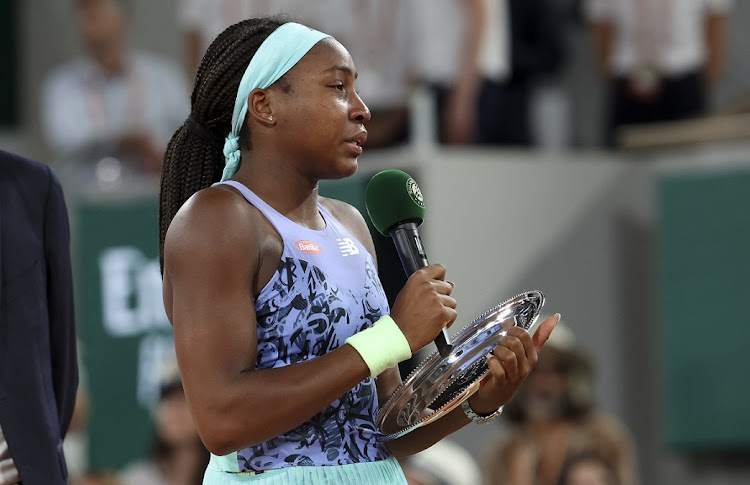 Finalist Coco Gauff of the US getting emotional during her speech in the trophy ceremony of the women's French final at Roland Garros on June 4 2022.
Image: John Berry/Getty Images

US teenager Coco Gauff was still struggling to hold back the tears hours after losing the French Open final to Poland's Iga Swiatek on Saturday and said her opponent, who is on a 35-match winning streak, was in a different league.

The tears started to roll straight after match point as Gauff was beaten 6-1 6-3 in just over an hour and she said she was struggling to hold it together when she faced the press later.

“I think for me it's just how I respond to everything going on. Because I think for right now like emotionally it's just a lot for me to handle, and I'm like trying really hard not to break,” she said.

“I think she [Swiatek] does a good job of taking the pressure moments and really rising to the occasion, and today she rose to the occasion. I do that pretty well too, but today she was just on another level,” Gauff added.

Long touted as a future Grand Slam champion, the 18-year-old Gauff said she had put pressure on herself throughout the year to match those high expectations, but her run to her first ever major singles final was something she had done for herself.

“I think this tournament was the first tournament this year where I went in trying to win for myself, and I think that was the difference in my mentality.”

Gauff, who became the youngest player to reach a Grand Slam final in 18 years and did it without dropping a set, said making the Paris showpiece would give her the confidence to deal with high pressure matches.

“I think that now that I have found that mental state, I know how to get there. I think it will help me in future tournaments,” she said.

“Now that I have seen the level, this level of number one and 35 matches [Swiatek's winning run], I know that what I have to do. Hopefully next time — I'm sure I'm going to play her in another final — and hopefully it's a different result.”

World No 1 Iga Swiatek confirmed her dominance of women’s tennis yesterday by sweeping aside US teenager Coco Gauff 6-1 6-3 to claim her second ...
Sport
2 months ago