I will play at Wimbledon if my body allows me to, says Nadal 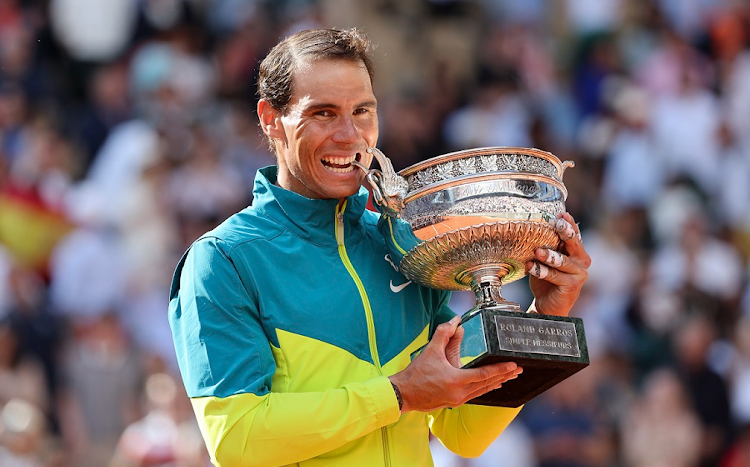 Winner Rafael Nadal of Spain during the trophy ceremony of the French Open final at Roland Garros in Paris on June 5 2022.
Image: John Berry/Getty Images

French Open champion Rafa Nadal will play at Wimbledon later this month if his body allows him to, the Spaniard said on Sunday after winning Roland Garros for a record-extending 14th time.

Nadal said he had played Sunday's final with a numbed foot thanks to a series of injections throughout the tournament, but that he would not go through a similar procedure again for the grass court Grand Slam.

“Wimbledon is a priority, always has been a priority. If I'm able to play with anti-inflammatories yes,” Nadal said.

“To play with anaesthetic injections, I do not want to put myself in that position again. It can happen once but no it's not the philosophy of life I want to follow.

“Let's see. I am always a positive guy and always expect the things are going the right way. Let's be confident, let's be positive and let's see what's going on.”

In January's Australian Open final Nadal, who turned 36 on Friday, came from two sets down to beat Daniil Medvedev and bag a second title. A few months earlier he had been considering retiring after a foot problem that has troubled him throughout his career resurfaced, forcing him to miss much of the 2021 season including Wimbledon, the Olympics and the US Open.

He arrived in Paris with his own doctor to get through the tournament despite the injury. On what comes next for him, Nadal said: “It's going to be a radio frequency injection on the nerve and trying to burn a bit the nerve and create the impact that I have now on the nerve for a long period of time.

“That's what we are going to try. If that works, I'm going to keep going. If that does not work, then it's going to be another story. And then I am going to ask myself if I am ready to do a major thing without being sure that things are going the proper way.

“A major surgery that doesn't guarantee me to be able to be competitive again and take a long time to be back [is a risk]. So let's do it step by step, as I did all my tennis career.”

Rafael Nadal brutally crushed Casper Ruud on Sunday to lift a record-extending 14th French Open trophy and increase his lead at the top of the list ...
Sport
2 months ago

World No 1 Iga Swiatek confirmed her dominance of women’s tennis yesterday by sweeping aside US teenager Coco Gauff 6-1 6-3 to claim her second ...
Sport
2 months ago

Coco Gauff: Iga Swiatek is 'on another level'

US teenager Coco Gauff was still struggling to hold back the tears hours after losing the French Open final to Poland's Iga Swiatek on Saturday and ...
Sport
2 months ago