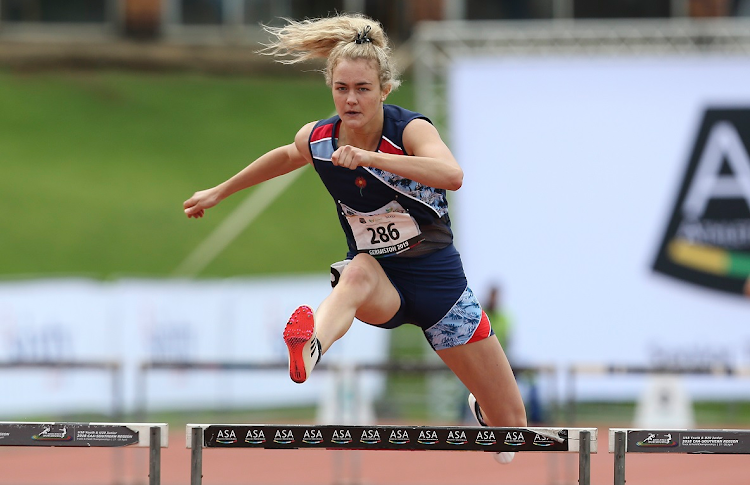 Not even superb performances by Zeney van der Walt and Taylon Bieldt could keep Kenya from the top of the medals table on the final day of the African championships in Mauritius on Sunday.

Van der Walt and Bieldt first claimed gold and silver in the women’s 400m hurdles and then they teamed up with Miranda Coetzee, the African champion in the individual 400m, and Banele Shabangu to win the 4x400m relay.

Their 3min 29.34sec effort might win them a berth at the world championships in Eugene, Oregon, next month, placing them 15th out of 16 available spots. The qualifying window closes on June 26.

Van der Walt won the hurdles in 56sec, with Bieldt crossing the line second in 56.67.

Soks Zazini won SA’s other gold medal, in the men’s 400m hurdles, in 49.42 on a cold and wet day where a Kenyan storm blew SA off the top of the standings.

The east Africans had started the day trailing SA by one gold, and they harnessed five from the final 16 events.

One might single out the women’s 800m, where favourite Prudence Sekgodiso discovered the harsh reality of tactics as she ended third after being boxed in by her Kenyan and Ethiopian rivals for the first 500 metres or so.

Jo-Ane van Dyk dominated the women’s javelin at the African championships in Mauritius on Saturday, single-handedly keeping SA on top of the medals ...
Sport
3 weeks ago

The three Kenyans and two Ethiopians in the eight-strong field engulfed her early on, never gave her space and smartly slowed the pace right down.

Sekgodiso’s strength is going out hard and forcing the field to chase, but by the time she found the gap to attack, her rivals had too much gas in their tanks and were able to go with her and out-kick her.

Jarinter Mwasya of Kenya won in a pedestrian 2min 02.80sec, ahead of Ethiopian Netsanet Gebre in 2:20.99.

Had she and Mwasya traded positions, SA would have topped the table, but this will go down as a learning experience for the 20-year-old.

If there is a finger of blame, it should be pointed at SA’s sprinting men who, for the first time since 2014, failed to win a single continental title.

Clarence Munyai finished a disappointing third in the 200m final. By the time he came out of the bend he was well behind Botswana’s 19-year-old Letsile Tebogo, who won in 20.26.

Cameroon’s Emmanuel Eseme was second in 20.61 and Munyai, once considered the future of SA sprinting, third in 20.69, exactly a second slower than the SA record he set in 2018.

A rag-tag men’s 4x100m relay outfit did well to land silver at the African championships in Mauritius on Friday, but it was left to the women to push ...
Sport
3 weeks ago

Had he won, SA would still have finished number one in Mauritius, equal with Kenya in terms of gold, but far superior in the silver count at 13 to five.

Munyai, now 24, was part of SA’s so-called sprint revolution of prospects to follow in the footsteps of Wayde van Niekerk, Akani Simbine and Anaso Jobodwana, but the reality is that the movement has lost its impetus.

Again, any finger of blame should not be wagging exclusively at him.

SA went to Mauritius holding crowns in the men’s 100m, 200m and 4x100m and left with nothing after losing two of those titles to Kenya and one to Botswana. Questions should be asked about why the relay team was not at full strength.

Ryan Mphahlele did everything in his power to try win the 1,500m, but he was chased down on the home straight by Abel Kipsang of Kenya.

Kyle Blignaut, who has yet to hit his straps this season, finished second in the men’s shot put with an effort of 20.60m. Nigeria’s defending champion Chukwuebuka Enekweshi clinched victory in the penultimate fifth round with a 21.20 championship record, his best effort of the competition by almost three-quarters of a metre.

Wayne Snyman was second in the 20km walk and Mpho Links and Phil-Mar van Rensburg  took bronze in the high jump bronze and javelin respectively.

SA finished with more medals than any other nation, 36, but it’s the victories that count the most.

Akani Simbine lost his African 100m crown to Kenya’s Ferdinand Omanyala in Mauritius on Thursday, but organisers had to measure the gap down to ...
Sport
3 weeks ago