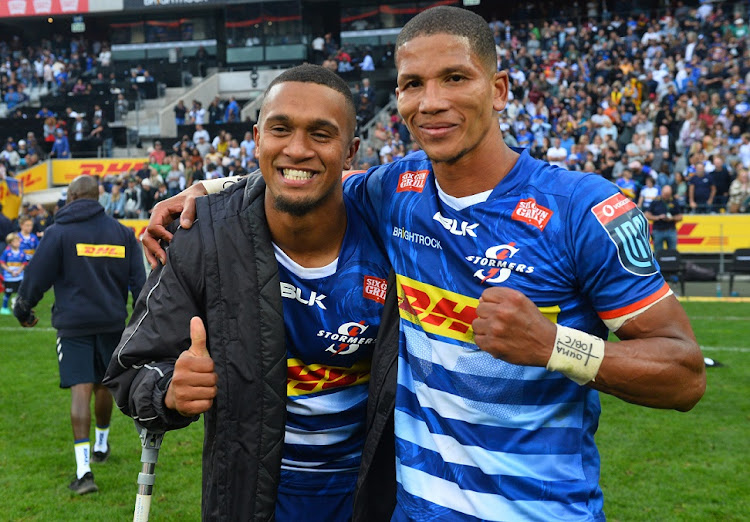 Leolin Zas (left, on crutches) and Manie Libbok of the Stormers after their United Rugby Championship semifinal win against Ulster at Cape Town Stadium on June 11 2022.
Image: Grant Pitcher/Gallo Images

The Stormers will go into next weekend's United Rugby Championship (URC) final against the Bulls without top try-scorer Leolin Zas.

The speedster left the field towards the end of the first half in the 17-15 semifinal win over Ulster at Cape Town Stadium on Saturday.

His absence will be a huge blow as Zas, apart from developing into a supreme finisher, has provided the team thrust up the left flank, often finding willing and able support runners in Hacjivah Dayimani and Warrick Gelant.

His absence next week was confirmed by coach John Dobson.

“He won't play next week. No question,” said Dobson about the winger, who has touched down 11 times in 12 URC matches.

How good was that? A special moment shared with the Faithful. Bring on the Final.#iamastormer #dhldelivers @Vodacom #URC pic.twitter.com/iM0DGZPvFo

Missing the final would be devastating for Zas, who has had previous misfortune with injury. In 2017 he broke two bones in his leg but the mental anguish of missing the final will sting as much.

The Stormers will be hoping midfield playmaker Damian Willemse will be available for the crunch clash. Willemse, who scooped the man of the match award against Ulster, has been struggling with a compound fracture in his elbow. He made it through the semifinal with some discomfort and is unlikely to back down from a place in the starting team next week.

That he plays will be crucial to the Stormers as they are a little thin in the centre department, with Rikus Pretorius out injured for a lengthy period and Dan du Plessis having just returned from an extended stint on the sidelines.

Apart from Zas, the Stormers will be without lock Adre Smith who was red-carded for having his fingers in the face of Ulster captain Iain Henderson in a hotly contested maul. Referee Mike Adamson dismissed the replacement lock on the advice of TMO Ben Whitehouse.

“They are obviously fighting for position in the maul, but his hand is in the face of the yellow player [Henderson] and it’s in and about the eye area,” advised the TMO upon review.

Our DHL Stormers come up with the goods when it matters most. #iamastormer #dhldelivers @Vodacom #URC pic.twitter.com/vISWrHeSig

Adamson responded: “So I’ve got clear contact with the eye or eye area. That’s a serious act of foul play and has to be a red-card because there is hand and fingers in and about the eye area. He knows where the face is, he knows he can’t put his hand into the face.”

A red card carries an automatic suspension but Stormers captain Steven Kitshoff believes the lock did not intend malice.

“The law is the law but I don't think there was any intentional foul play,” Kitshoff said.

Still, it leaves the Stormers thin in the second row. There will be more pressure on locks Marvin Orie and Salmaan Moerat but the pair acquitted themselves well against Ulster. In fact, the Stormers line-out that often sees Dayimani and Evan Roos going into aerial combat, lost just one ball in that facet in the semifinal.

It had been an area of concern earlier in their campaign but they will have to be near-flawless in that department against a potent Bulls line-out spearheaded by Ruan Nortje in the final.

Springbok coach Jacques Nienaber has announced a squad of 43 players for the season that features the Incoming Series against Wales next month and ...
Sport
3 weeks ago

This match at a throbbing Cape Town Stadium came to a pulsating climax as the Stormers made a late entry on the scoreboard, if not write a new ...
Sport
3 weeks ago