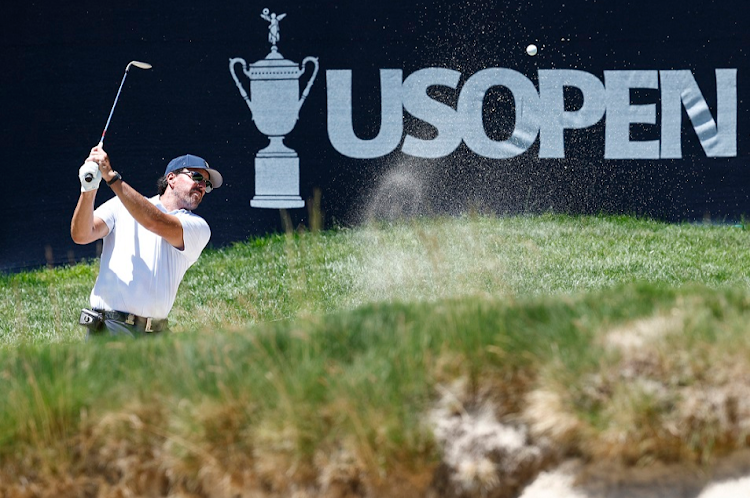 Phil Mickelson of the US plays a shot from a bunker on the 16th hole during a practice round prior to the 122nd US Open Championship at The Country Club in Brookline, Massachusetts on June 15 2022.
Image: Jared C. Tilton/Getty Images

Of all the storylines swirling ahead of this week's US Open, none are as compelling as Phil Mickelson's latest bid to win the tournament for the first time.

The 156-player field for the year's third major, known as the toughest test in golf, features plenty of in-form players looking to build on impressive starts to the season but none will grab headlines like Mickelson will.

Mickelson has been a runner-up at the US Open a record six times and his latest bid to complete a career Grand Slam comes a week after he emerged from a self-imposed hiatus to play in the first event of the Saudi-backed LIV Golf Invitational Series.

Mickelson was the toast of the golf world a year ago when, at age 50, he won the PGA Championship to become golf's oldest major champion but he has since come under fire over comments he made about the breakaway LIV circuit.

The six-time major champion will tee off at The Country Club outside Boston on Thursday under a cloud of uncertainty having not competed on the PGA Tour since January.

“That's going to be a challenge, right. It's the most difficult test in golf,” Mickelson said.

“It was important for me to have a bit of competitive golf last week and identify some of the areas of weakness. It was one of the worst putting tournaments I've had in years.”

The 7,254-yard layout at Brookline will play as a par-70 and while it may not be long by modern PGA Tour standards it will command respect and challenge all aspects of a player's game. There are many blind tee shots at Brookline and all will require accuracy due to the unforgiving rough that is customary for a US Open and could be five inches (12.7cm) in some areas.

Headlining the field is tournament favourite and world number three Rory McIlroy, who triumphed at the 2011 US Open and arrives this year fresh off a successful title defence at the Canadian Open. McIlroy has gone nearly eight years since winning his fourth major but has enjoyed top-10 finishes at the last three US Open tournaments and this year finished second at the Masters and in eighth at the PGA Championship.

“I'm getting back to a place where I'm feeling a lot more comfortable,” McIlroy said. “My game is now at a place where I feel confident going to these golf courses that are set up more difficult than everyday tour events and knowing that I have the game and mentality to succeed on them.”

Rory McIlroy is riding a wave of momentum — and support — heading into this week's US Open at The Country Club in Brookline, Massachusetts.
Sport
2 weeks ago

World number one Scottie Scheffler has cooled off since he won the Masters for his fourth PGA Tour win in six starts but has a clutch short game that could prove invaluable given Brookline's small greens.

PGA Championship winner Justin Thomas, sticking with his new plan of competing the week before a major, was tied for the lead with two holes to play at the Canadian Open but carded back-to-back bogeys and finished third. Defending champion Jon Rahm, who became the first Spaniard to win the US Open after he birdied the final two holes for a one-shot triumph, is not in the same peak form and finished in a share of 10th place at his only tune-up event.

“You need everything. You need to drive well, hit your irons well, chip well, and putt well and be mentally sane for four days. You can't hide, period,” world number two Rahm said of the challenge that awaits at Brookline.

Tiger Woods, who marked his return from a February 2021 car crash by playing the year's first two majors, will not be part of the 156-player US Open field as he pulled out last week so he could give his body more time to heal.

SA’s Charl Schwartzel held off compatriot Hennie du Plessis to claim the biggest pay cheque in golf history at the opening event of the LIV ...
Sport
3 weeks ago

Woods back in PGA spotlight, Mickelson still in the shadows

Tiger Woods will be back in the global golf spotlight when the PGA Championship gets under way this week but defending champion Phil Mickelson, his ...
Sport
1 month ago