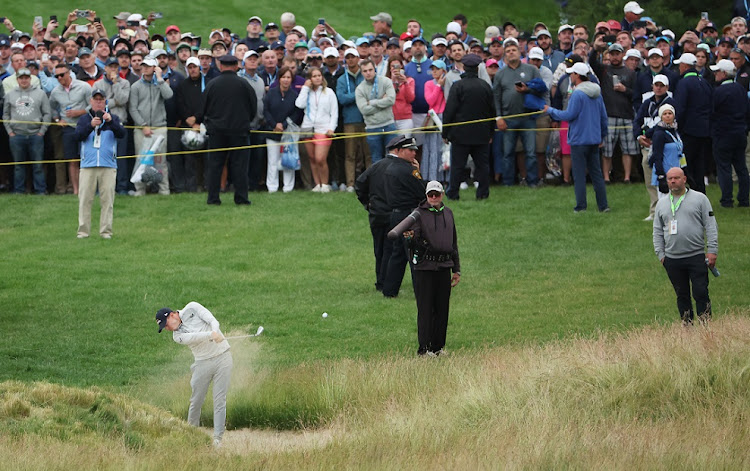 Matt Fitzpatrick of England plays a shot from a fairway bunker on the 18th hole during the final round of the 122nd US Open Championship at The Country Club in Brookline, Massachusetts on June 19 2022.
Image: Patrick Smith/Getty Images

England’s Matt Fitzpatrick delivered a shot for the ages when he needed it most on Sunday, finding the green from a fairway bunker at the last hole to win the US Open and claim his first career major title.

Fitzpatrick’s incredible shot from the sand 161 yards out settled 18 feet from the cup to all but end what had been a heart-pounding back-nine battle with world number one Scottie Scheffler and Will Zalatoris at The Country Club.

“It’s one of the best shots I ever hit, there’s no doubt about it,” Fitzpatrick said after a two-under-par 68 that left him at six under for the week.

There had been a lot of talk about Fitzpatrick all week given he won the 2013 US Amateur at the same demanding venue.

The 27-year-old, who began the final round in a share of the lead with Zalatoris and one shot clear of defending champion Jon Rahm, reached the turn with a one-shot lead after mixing two birdies with two bogeys. But he carded two quick bogeys and, coupled with a Zalatoris birdie, walked off the 11th green trailing by two shots.

He said doubts began to creep in at that point.

“For me, like, I just felt like I could keep hitting the greens and giving myself putts, my putting would take over and I’d make a couple [of birdies] coming in, and fortunately that’s what I did. Yeah, it worked out nicely.”

Birdies at the 13th and 15th put Fitzpatrick back in the driver’s seat and he held on to join Jack Nicklaus as the only players to win a US Open and US Amateur at the same venue.

Fitzpatrick celebrated with his caddie and then his parents and younger brother, Alex, who was his caddie for his U.S. Amateur win.

At the par-four 15th, Zalatoris’ tee shot ended up in thick rough and when he failed to get up and down from a greenside bunker Fitzpatrick had a two-stroke cushion with three to play. Zalatoris had a chance to draw level at the par-four 17th but his birdie putt from 12 feet came up just short, setting up the dramatic finish.

The PGA Tour’s reigning rookie of the year needed to make a birdie at the last to force a playoff but his putt slid just past the left edge of the hole. Zalatoris, now a three-time runner-up at the majors having fallen just short at the 2021 Masters and last month’s PGA Championship, was once again left to wonder what might have been had it not been for two early bogeys.

Defending champion Jon Rahm squandered a chance to take the lead into the final round of the US Open after a closing double-bogey left him one shot ...
Sport
2 weeks ago

“I battled like crazy,” said Zalatoris, who fought his way back into the mix with three birdies over a sizzling four-hole stretch into the turn.

“Obviously, you say that about every US Open round you play, but considering where I drove it today, the fact I was even under par was obviously pretty nice.”

Scheffler, seeking his fifth win of the year, made a dream start with four birdies over the first six holes and held the lead for a brief spell but made two bogeys to start the back nine before grabbing a late birdie

“Today was one of those days I was playing from behind and put myself in position to win the tournament,” said Masters champion Scheffler.

“There’s definitely a few things I could have done differently, but I’m not going to waste time thinking about it. I’m going to recover from this and move on and hopefully be better from here.”

Former Masters champion Hideki Matsuyama carded the low round of the week, a five-under-par 65 that powered him into fourth place, a shot clear of pre-tournament favourite Rory McIlroy (69) and twice major winner Collin Morikawa (66).

World number two Rahm, who squandered a chance to take the 54-hole lead after a closing double-bogey on Saturday, shot a four-over 74 that left him seven shots back of Fitzpatrick.