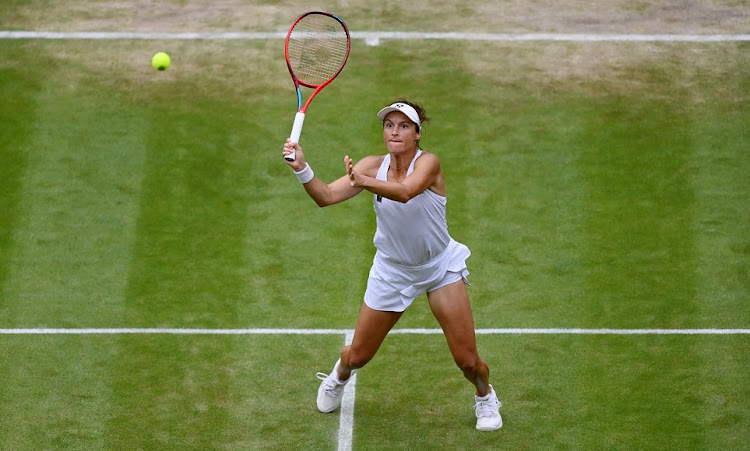 Tatjana Maria of Germany plays a smash against conpatriot Jule Niemeier in their quarterfinal at The Championships Wimbledon 2022 on July 5 2022.
Image: Justin Setterfield/Getty Images

Experience overcame youth in the Wimbledon quarterfinals when 34-year-old Tatjana Maria beat Jule Niemeier, 22, 4-6 6-2 7-5 in an entertaining battle of German outsiders on Tuesday.

Maria, who returned from maternity leave only last summer after giving birth to her second daughter, is ranked 103 in the world and Niemeier 97.

“I have goosebumps everywhere,” Maria said in a courtside interview. “It was such a tough match against Jule — I think today we made Germany really proud.”

Both women started nervously, spraying errors on either side of Court 1, but Niemeier, playing at her first Wimbledon, took the early initiative, breaking in the first game and grabbing the set when Maria put a forehand wide.

Maria, upped her game in the second set, producing some telling returns, heavy slice and deft drop shots. She took the set with a volleyed winner on Niemeier's serve.

Second seed Rafael Nadal took another step forward in his bid for a rare calendar-year Grand Slam on Monday by booking his spot in the Wimbledon ...
Sport
1 month ago

In a match of fluctuating fortunes, big-hitting Niemeier could not find her rhythm on her greatest weapon — the serve — producing 11 double faults. Among the unforced errors, the duo shared rallies of high quality and commitment, including a memorable 13-shot battle late in the third set when Niemeier threw herself on the turf in a vain attempt to reach a drop shot.

Neither woman had reached a Grand Slam quarterfinal before but Maria held her nerve in the final set, breaking back after dropping her serve in the fifth game, then taking the match when Niemeier, on serve, netted on match point.

Watched by beaming husband and coach Charles Maria, she praised the crowd for their support and said she could not believe she had reached a Grand Slam semifinal.

She will play either her friend Ons Jabeur, the third-seeded Tunisian, or 66th-ranked Czech Marie Bouzkova in the semis.

Top seed Swiatek stunned by Cornet in Wimbledon third round

The Iga Swiatek winning machine broke down on a lush Wimbledon lawn on Saturday as the world number one and red-hot favourite for the title was ...
Sport
1 month ago

Top seed Novak Djokovic raised his level to put an end to the fairytale run of Dutch wildcard Tim van Rijthoven during a battling 6-2 4-6 6-1 6-2 ...
Sport
1 month ago