Blitzboks to play Australia in semifinals on Sunday 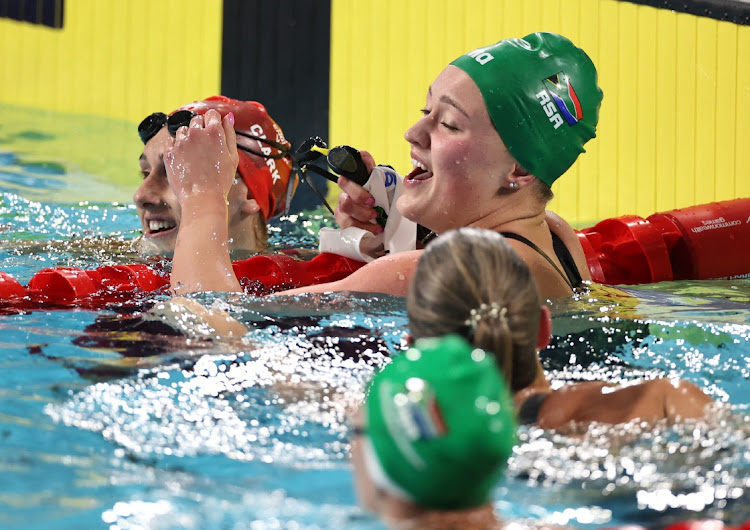 Young guns Lara van Niekerk and Pieter Coetzé delivered a double golden sunset for SA on the second night of the Commonwealth Games on Saturday.

The schoolkids from Pretoria both trailed at various points in their races — the women’s 50m breaststroke and men’s 100m backstroke — but they both battled hard in the trenches to grab two victories and lift the nation to seventh on the medals table.

Van Niekerk, 19, bagged the nation’s first medal when she won the women’s 50m breaststroke in a third consecutive Games record.

Tatjana Schoenmaker ended fourth in 30.41 while Kaylene Corbett, the third SA swimmer in the final, was sixth in 31.10.

Van Niekerk, the world championship bronze medallist in this event last month, had gone fastest in the heats and the semifinals on Friday in 29.82 and 29.80.

Lara van Niekerk looking to make her mark in the pool

The rapid rise of Lara van Niekerk has put SA swimming in the unique position of being able to aim at cleaning up gold in all three women’s ...
Sport
7 months ago

She didn’t have the best start on Saturday night, but she held her form and swam hard as she hunted down Clark in the lane next to her to win with some room to spare.

“In the race I knew it was really close because the crowd went wild,” said Van Niekerk. “I just heard the noise so I knew they were close.”

She admitted that she experienced nerves in the build-up to the final. “I was freaking out to be honest. I let all my nerves go out warm-up. And then suiting up still freaking out, I literally said to my coach ‘I’m freaking out, I’m going to explode’.

“And then I just calmed down as soon as I went to the call room and just knew I’ve done everything I had to and I’m ready.”

Her victory sets up Team SA with a great chance of scooping a golden clean-sweep in the women’s breaststroke races, with Schoenmaker looking to defend the 100m and 200m crowns she won four years ago.

In fact, they could get at least two medallists in the two longer events. 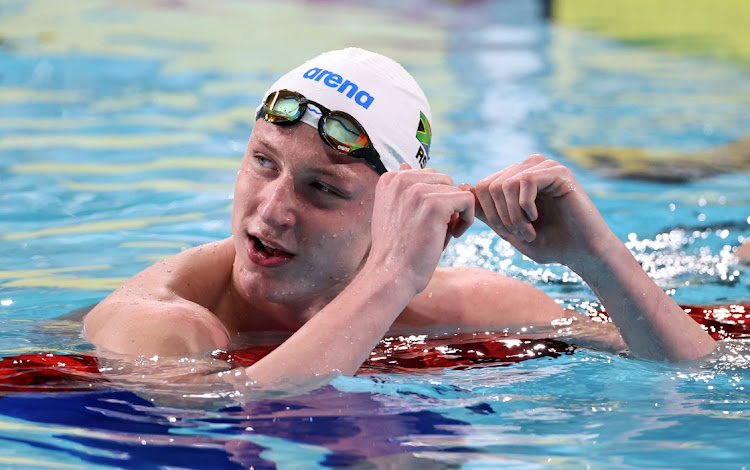 The 18-year-old Coetzé, the favourite in the men’s 100m backstroke, was first into the wall, but he surrendered the lead after the turn.

England’s Brodie Williams looked like he might steal the win, but Coetzé pulled through to win in 53.78. Australian Bradley Woodward was third in 54.06.

Matthew Sates ended sixth in the men’s 200m freestyle, and then a little more than an hour later he touched fourth in the 400m individual medley.

He was short of his personal bests in both races, but even those times would not have earned him spots on the podium.

Hard lockdown of 2020 had at least one positive effect, hastening the incredible rise of Pieter Coetzé, the tallest and youngest of SA swimming’s new ...
Sport
3 months ago

Elsewhere, the Blitzboks demolished Canada 33-0 in the quarterfinal, crossing for five tries, two of them by Ronald Brown. In their final pool game earlier in the day they trounced Scotland 34-0.

They will face Australia in the one semifinal on Sunday, while Olympic champions Fiji take on defending champions New Zealand in the other.

Liske Lategan scored the SA women’s rugby team’s first try of the tournament to give them an early 5-0 lead against Scotland in their final pool encounter.

But it wasn’t enough as they ended up losing 33-12 and being sent into the consolation placings section of the knockout stages.

In the netball, the Proteas were downed 68-49 by Jamaica in their Games opener.

The men’s hockey team had to settle for a 2-2 draw in their opener against Pakistan, but it was a heartbreaking one after conceding the equaliser in the final minute of play.

SA never trailed in this contest, going up 1-0 late in the first quarter through Connor Beauchamp. Rizwan Ali levelled matters in the second quarter with a power flick from a penalty corner.

Matthew Guise-Brown gave SA the lead again in the final quarter, from a penalty flick. But with less than a minute to go Pakistan won a penalty corner. SA goalkeeper Gowan Jones parried the shot, but Afraz latched onto the airborne ball and slapped it into the net with a double-backhand.

Lawn bowls has been a generous source of silverware for SA in the past, but they are still in the round-robin phase. Keep an eye on them.

Boxing has been through a drought with one bronze since 2010. Featherweight boxer Amzolele Dyeyi was comprehensively outpointed by India’s Hussamuddin Mohammed, a bantamweight bronze medallist four years ago.

Pretoria schoolkids Lara van Niekerk and Pieter Coetzé are primed to lead Team SA’s medal charge at the Commonwealth Games on Saturday after ...
Sport
2 weeks ago

Team SA face a bitter battle for gold medals at the Commonwealth Games in Birmingham from Friday, fighting not only hungry competitors from other ...
Sport
2 weeks ago