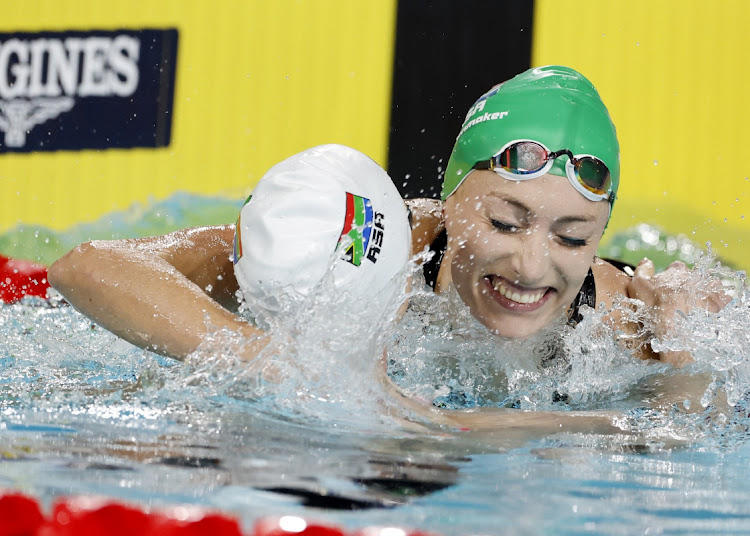 Tatjana Schoenmaker celebrates with Kaylene Corbett after they won gold and bronze in the 200m breaststroke in Birmingham.
Image: REUTERS/Stefan Wermuth

The Tuks swimmer led from the start to touch first in 2min 21.92sec — slightly slower than her 2:21.76 effort in the heats — but she beamed with joy as she hugged Corbett in the pool straight after the race.

Corbett has swum in her wake since the last Games, finishing off the podium at the 2019 world championships and then the Tokyo Olympics, but on Sunday they got to share a medal ceremony at last.

Australian Jenna Strauch was second in 2:23.65, while Corbett, who had to work hard on the final lap after turning in fifth spot, clocked 2:23.67.

This was the second breaststroke gold for SA after Lara van Niekerk’s 50m triumph on Saturday. Schoenmaker will set about the defence of her 100m breaststroke title on Monday in the heats and semifinals. Earlier Chad Le Clos won the 18th Games medal of his career, but he lost the 200m butterfly crown he had held since 2010.

He is now jointly holds the all-time record haul of 18 Games medals alongside two shooters, Australian Phillip Adams and Mick Gault of England.

Le Clos went out hard and held the lead going out of the final turn, but New Zealand’s Lewis Clareburt, who on the Saturday won the 400m individual medley that Le Clos had won 12 years ago, stormed past at the end to touch in 1min 55.60sec.

His mark survives for at least another four years.

Newly crowned 100m backstroke champion Pieter Coetzé is on track to add a 50m backstroke gong to his haul after winning his semifinal in 24.81, just one-hundredth of a second faster than Andrew Jeffcoat of New Zealand, who won the other semifinal.

She won her 16th in the women’s 50m freestyle on Sunday, and could surpass 18 before the end of this gala.

Le Clos has the 100m butterfly on Monday as well as the 4x100m medley and 4x200m freestyle relays to add to his haul.

In other action elsewhere, bowlers Thabelo Muvhango, Bridget Calitz, Esme Kruger and Johanna Snyman narrowly held off a powerful England team in their women’s fours quarterfinal 12-11, after enjoying an 8-2 lead after six ends.

The English outfit boasted two world championship medallists, and all had made the podium at previous Games.

Weightlifter Anneke Spies ended fourth in the women’s 59kg competition. She managed 85kg in the snatch and 105kg in the clean and jerk for a total of 190kg, 6kg short of the podium.

Riddle gave Team SA some early hope in the first leg, finishing the 300m swim in first place, and he was still in the fight for the lead by the end of the 5km bike and fourth after the 2km run.

But after that the SA team slipped backwards.

The mighty Blitzboks rampaged through the Olympic champion Fijians 31-7 in Birmingham on Sunday night to claim the Commonwealth Games gold.
Sport
1 week ago

Team SA face a bitter battle for gold medals at the Commonwealth Games in Birmingham from Friday, fighting not only hungry competitors from other ...
Sport
2 weeks ago

Marioné Fourie closed out SA’s world championship campaign with a rare personal best on Sunday as the nation left Eugene, Oregon in the US without a ...
Sport
2 weeks ago